This guide will provide you with detailed instructions which will help you establish your ancestry and find your ancestors using the tools available on Genealogy Quebec. Examples of the challenges you may encounter while establishing your ancestry are used throughout the guide.

Genealogy Quebec offers a multitude of complementary genealogical tools which you will need to find your ancestors.

Finding your ancestors using the LAFRANCE is easy once you find a marriage that predates 1920. The real challenge is to find that marriage.

When establishing your ancestry on Genealogy Quebec, your initial objective is to find a marriage that predates 1920. You will be able to do so by using our Marriage 1926-1997, Men series, Women series and Kardex tools.

The ancestry of Bertrand Desjardins, born on the 24th of November 1948 in Montreal, will serve as our example throughout this guide.

Here is the information established by Bertrand before the start of his research.

Bertrand Desjardins, born on the 24th of November 1948 in Montreal

François-Joseph is the eldest child of his family; Suzanne is the second child. François Desjardins’ father is Charles Desjardins.

Second step – Using the information to find your ancestors

It is now time to use the information we’ve gathered in the first step. First of all, we must verify whether this information allows us to track down a marriage that predates the year 1920. If that is the case, a simple search for the wife and husband’s names in the LAFRANCE should allow us to find the marriage record.

If that is not the case, we will have to turn to the complementary tools. Using your notes, try to find the earliest marriage you can get your hands on. This marriage will be your starting point.

If this marriage took place between 1920 and 1940, use the Men and Women series and the Kardex for your research.

(Unable to find the marriage you are looking for? Contact us at contact @ institutdrouin.com, we will point you in the right direction!)

Let’s go back to Bertrand Desjardins’ attempt at discovering his ancestors using the Genealogy Quebec website.

It is now time for Bertrand to put the information gathered during the previous step of his research to use. The first thing Bertrand notices is that his father, François-Joseph Desjardins, was born in 1908. This signifies that François-Joseph’s parents, François Desjardins and Anna Jacques, were married in 1908 at the latest; children born out of wedlock were a rarity at the time. A simple search for their names in the LAFRANCE should lead to their marriage.

Within minutes, Bertrand was able to find the first LAFRANCE mariage of his paternal ancestry.

The marriage record indicates that François Desjardins’ parents are Charles Eugène Desjardins and Marie Malvina Fortin. A search in the LAFRANCE should allow us to find their marriage.

From this point on, it is simply about repeating the process of searching for the parents’ marriage until we reach the first immigrant of the lineage. In Bertrand’s case, the first immigrant is Alexandre Roy dit Desjardins, who married Marie Major on the 11th of September 1668 in Québec city.

Bertrand Desjardins’ paternal ancestry is completed within minutes thanks to the LAFRANCE. All that is left now is the presentation of this work.

There are several templates available on the internet to organize and present your ancestry.

His paternal ancestry completed, Bertrand decides to tackle the maternal side of his family. This time, there is no way to know if Bertrand’s grandparents’ marriage was celebrated before 1920. A LAFRANCE search for Émile Bertrand and Irène Michaud yields no results. Bertrand must now turn to the Drouin Great Collections; the Men and Women series and the Kardex.

To use the Men and Women series, head over to the Drouin Institute’s Great Collections category and click on “Search by family in the Great collections”.

The search is done by family name.

The results are separated by tools and are ordered in alphabetical order of the subject’s first name. As a result, an Albert would be found on the first few pages in the results. A Zenophile would be on the last page.

The format used in the Men and Women series isn’t the most intuitive. This image should help you understand the layout:

Searches for the surnames Bertrand in the Men Series and Michaud in the Women Series produced no relevant results. The Kardex is next.

The Kardex must be navigated manually, as it doesn’t come with a built in search engine.

The files are sorted by letter and by the name of the husband.

Since we are looking for Émile Bertrand’s marriage, we have opened the BertrandEdouard – BertrandHypolite folder. The first file will contain the marriage of an Edouard Bertrand. Seeing as the files are ordered in alphabetical order of the husband’s first name, Émile Bertrand’s file should be among the first ones.

Unfortunately, the file isn’t in this folder.

As mentioned earlier, it is possible that Émile could be identified as Joseph Émile in his marriage file. To verify this possibility, we must look into the BertrandJoseph folder. 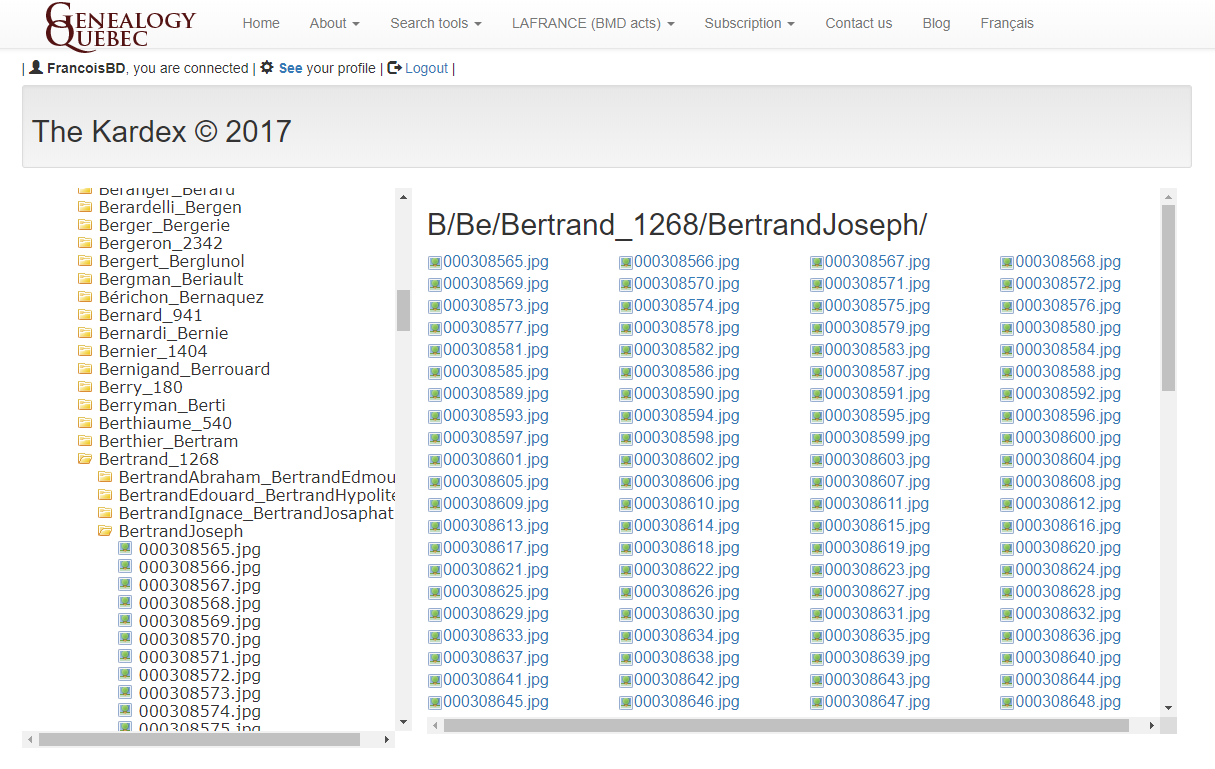 Note that the files are first sorted by the man’s first forename, and then by the woman’s surname. The marriage file of a Joseph Émile and a Michaud will be found at Michaud and not at Émile.

The file was in fact in the BertrandJoseph folder, sorted by Michaud.

(Please note that this guide was made when the period covered by the LAFRANCE ended in 1914. Today, we would’ve been able to find the Bertrand / Michaud marriage with a simple search in the LAFRANCE, as the period it covers extends to 1920, and the marriage was celebrated in 1915.)

We now know that Émile’s parents are named Antoine Wilfrid Bertrand and Rose Anne St-Aubin. We should be able to find their marriage in the LAFRANCE.

The next step is to find Antoine Wilfrid Bertrand’s parents’ marriage in the LAFRANCE, and to follow the paternal lineage all the way up to the first immigrant.

This first immigrant is Jean Bertrand, who married Marie Charlotte Brar on the 23rd of September 1697 in Montreal.

In the world of genealogical research, it is often necessary to call upon one’s inner detective. Sometimes, the usual procedure doesn’t lead to the desired results. In those cases, a certain amount of creativity and initiative is necessary to pull through.

For a good example of that, let’s go back to Bertrand Desjardins’ paternal ancestry. Bertrand had no difficulty finding his grand-father’s marriage in the LAFRANCE thanks to the information established at the start of his research.

Let’s now imagine a scenario where Bertrand’s initial gathering of information did not allow him to find his grand-parents’ names. Essentially, Bertrand’s starting point is now his own parents and the only information available to him is his parents’ marriage date, their dates of birth and the date of death of his father.

Since marriages don’t go past 1919 in the LAFRANCE and 1940 in the Great Collections, Bertrand has to turn to the Marriages and Deaths 1926-1997 tool.

A search for a Desjardins and Bertrand couple in the Marriage 1926-1997 section allows us to find their marriage:

While this document provides us with tons of interesting information, it doesn’t help us find Bertrand’s grand-parents’ marriage, as they aren’t mentioned in the record.

This is when some initiative and creativity is required to push the research further.

We know François Joseph Desjardins died on the 1st of September 1963.

We are able to find his death record. Luckily, the file indicates that the mother’s name is JACQUES, A. and that the father’s name is DESJARDINS, F. A search for a Desjardins/Jacques couple in the LAFRANCE will allow us to find their marriage, and to trace back Bertrand’s paternal ancestry.

The instructions and examples given in this guide will cover most of the situations you will encounter when establishing your ancestry on Genealogy Quebec.

Do not hesitate to contact us at contact @ institutdrouin.com if you have any questions regarding this guide or the process of retracing your ancestors.