Accueil » Articles » From Pascal to Noël: The impact of the calendar on your ancestors’ names

In French Canada, the religious calendar punctuates daily life until the 20th century. This influence is also conspicuous in the first names given to children.

The baptisms recorded in Quebec between 1621 and 1849, available on PRDH-IGD, account for this phenomenon. Christmas babies named Noël, Noëlla or Marie-Noëlle are the best-known example. This blog post will track religious and other seasonal events in French Canada via baptismal records.

The year begins with a very appropriate name: unsurprisingly, half of baby boys named Janvier between 1621 and 1849 are baptized in January. The Three Kings’ Day, or Epiphany, also leaves its mark as 22% of children named Épiphane or Épiphanie are baptized within two days of January 6th. 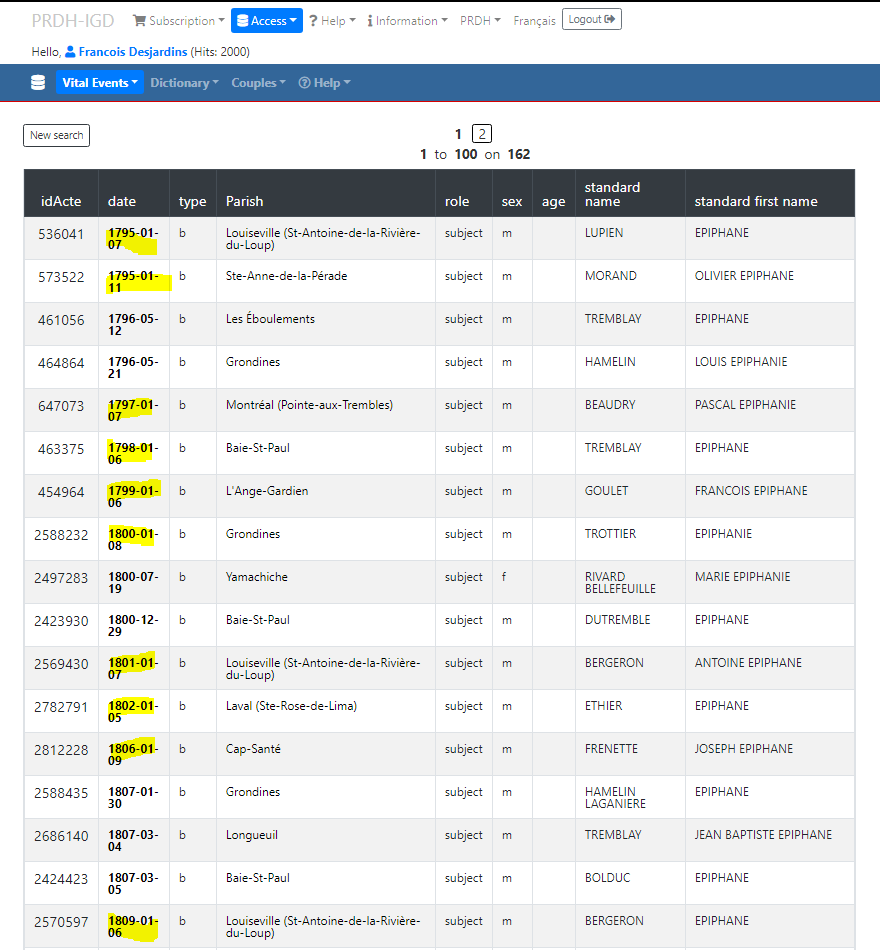 Lent, which spans from Ash Wednesday to Holy Saturday, and Eastertide, which lasts until Pentecost, are of great importance in the catholic calendar. As a result, 43% of Pascals are born in March or April. It is customary that marriages are not allowed during Lent. “Dispensations from the prohibited time” have to be delivered by the bishop.

The analysis of French-Canadian baptisms highlights a few changes in the catholic calendar. For example, Saint Benedict’s Day is celebrated on July 11th since the Second Vatican Council. However, it is on March 21st that Benedict of Nursia is commemorated in French Canada, and 21% of Benoîts (French form of Benedict) are baptized within two days of this date.

The effect is also perceptible for very common names, like Jean-Baptiste, inherited from John the Baptist, who is the patron saint of French Canadians since 1908. However, the celebrations of the Saint-Jean-Baptiste, Saint John’s Day, which coincide with the summer solstice, date way further back. The Jesuit Relations report a ‘Saint John’s fire’ in Quebec as early as the night of June 23rd, 1636. This feast bears a political meaning in Quebec since at least the 19th century. On June 24th, 1834, the patriotic song Ô Canada! Mon pays, mes amours (‘O Canada! my country, my loves’) is performed for the first time. It should not be confused with current Canadian anthem O Canada, although it was also composed for Saint-Jean-Baptiste Day as a French-Canadian patriotic song a few decades later, in 1880. Jean-Baptiste is a common first name all year long, but a peak is observed in the days surrounding June 24th.

A more surprising finding is the concentration of Augustins in the month of August. This phenomenon, which is not of religious origin, rather arises from the etymological link between the month of August (août in French) and Augustin, which both derive from latin augustus. 12% of Augustins are born during that month. This proportion reaches 22% in the French-Canadian elite, such as seigneurs, lawyers, notaries, doctors as well as merchants, for example. The father’s profession can be found on most baptismal records. When provided, this information is generally indicated on the record certificates available on PRDH-IGD (What is PRDH-IGD?). 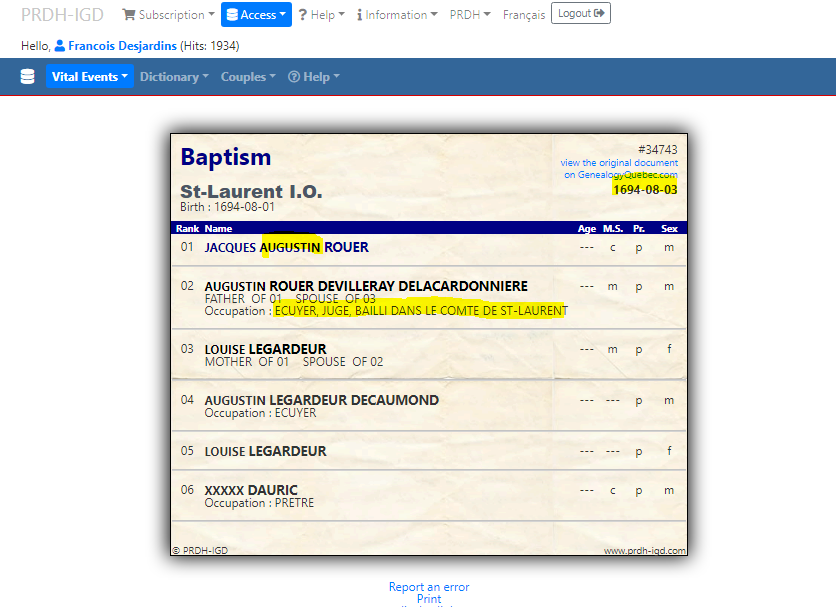 PRDH-IGD baptism certificate of an Augustin born in August. Note that the father is a judge.

All Saints’ Day, celebrated on November 1st, also yields a French name, Toussaint (literally ‘All saints’). The five-day period around this date groups one third of all 4279 Toussaints born in Quebec between 1621 and 1849. The influence of the religious calendar on first names is not specific to French Canada: it is also visible among French pioneers. For example, Toussaint Giroux, from whom most Giroux descend, was baptized on November 2nd, 1633 in Réveillon, in the Perche region. 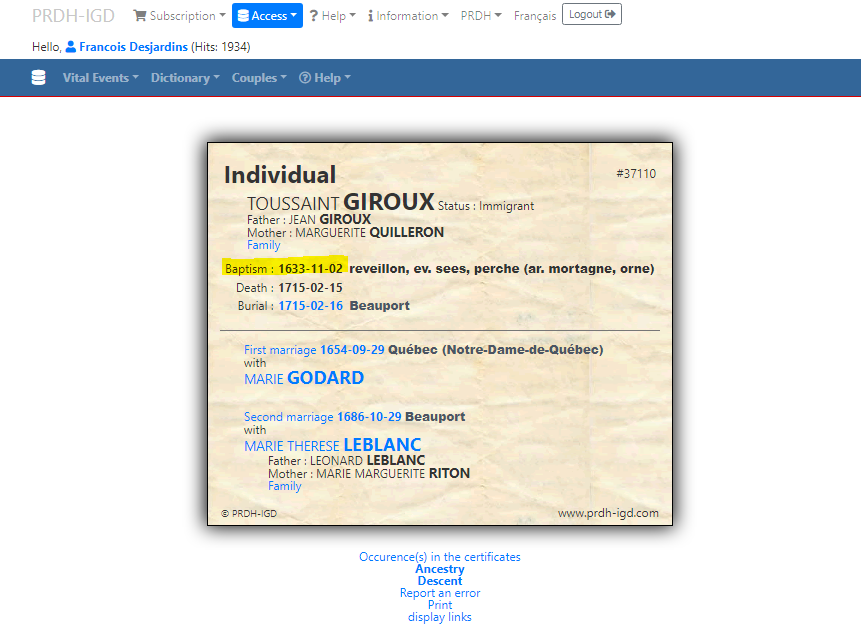 All Saints’ Day paves the way for several major feasts during the months of November and December, which mark the end of the agricultural activities.

Martin is another fairly common first name that draws a large proportion of baptisms to its feast: 21%. Saint Martin’s Day, celebrated on November 11th, is indeed an important day in the religious as well as the agricultural calendar. Lionel Groulx, an important priest and historian, reports in Chez nos ancêtres (‘In our ancestors’ homes’, 1920) a custom that would take place on Saint Martin’s day in many seigneuries. As the harvest is over, land tenants must visit the seigneur in his manor house and pay their annual dues. The event is also described in Philippe Aubert de Gaspé’s Les anciens canadiens, known as one of the first novels of Quebec.

Just like Jean-Baptiste, Catherine is a very popular first name influenced by the feast day of its patron saint: over 5% of baptisms are concentrated in a five-day period around November 25th, an important religious and cultural celebration since the time of New France. The famous St. Catherine’s Taffy, which is attributed to saint Marguerite Bourgeoys, a prominent figure in the early development of Montreal, is prepared on that day. This French-Canadian culinary tradition still persists today.

Noël and its derivatives are the archetype of calendar names: almost 40% of 3395 baptisms are celebrated within two days of Christmas. The year comes to an end with Saint Sylvester’s Day, or New Year’s Eve, which sees the birth of 43% of Sylvestres of the time.

Proportion of baptisms in the vicinity of the date associated with a few first names in the baptismal records on PRDH-IGD.com

* In the case of first names referring to a month, the number in this column indicates the percentage of baptisms recorded during that month.

This exercise, conducted with the exceptionally well-preserved data of the Drouin Collection Records, indexed on Genealogy Quebec and PRDH-IGD, sheds light on the influence of the calendar on given names. By paying renewed attention to the link between names and dates of birth, you will probably also be able to make sense of the names of some of your ancestors.