The destiny of the French colonies in North America was forged by their conflicts with the British Empire and the American colonies. These conflicts left their mark in the parish registers, which remain a constant throughout centuries of change. This article is the first of a series aiming to illustrate the historiographical power of parish registers using GenealogyQuebec.com‘s LAFRANCE tool as well as the PRDH-IGD.com database.

The French and Indian War is known as the American theater of a worldwide conflict, the Seven Years’ War (1756-1763), during which the French colony of Canada is ultimately conquered by the British Empire. Despite the upheavals, priests keep recording, in the parish registers, the milestones of the lives of their parishioners. These records, which are instrumental to French-Canadian genealogy, also are a historical treasure trove as they reveal the impact of the war on the population of the St. Lawrence Valley. 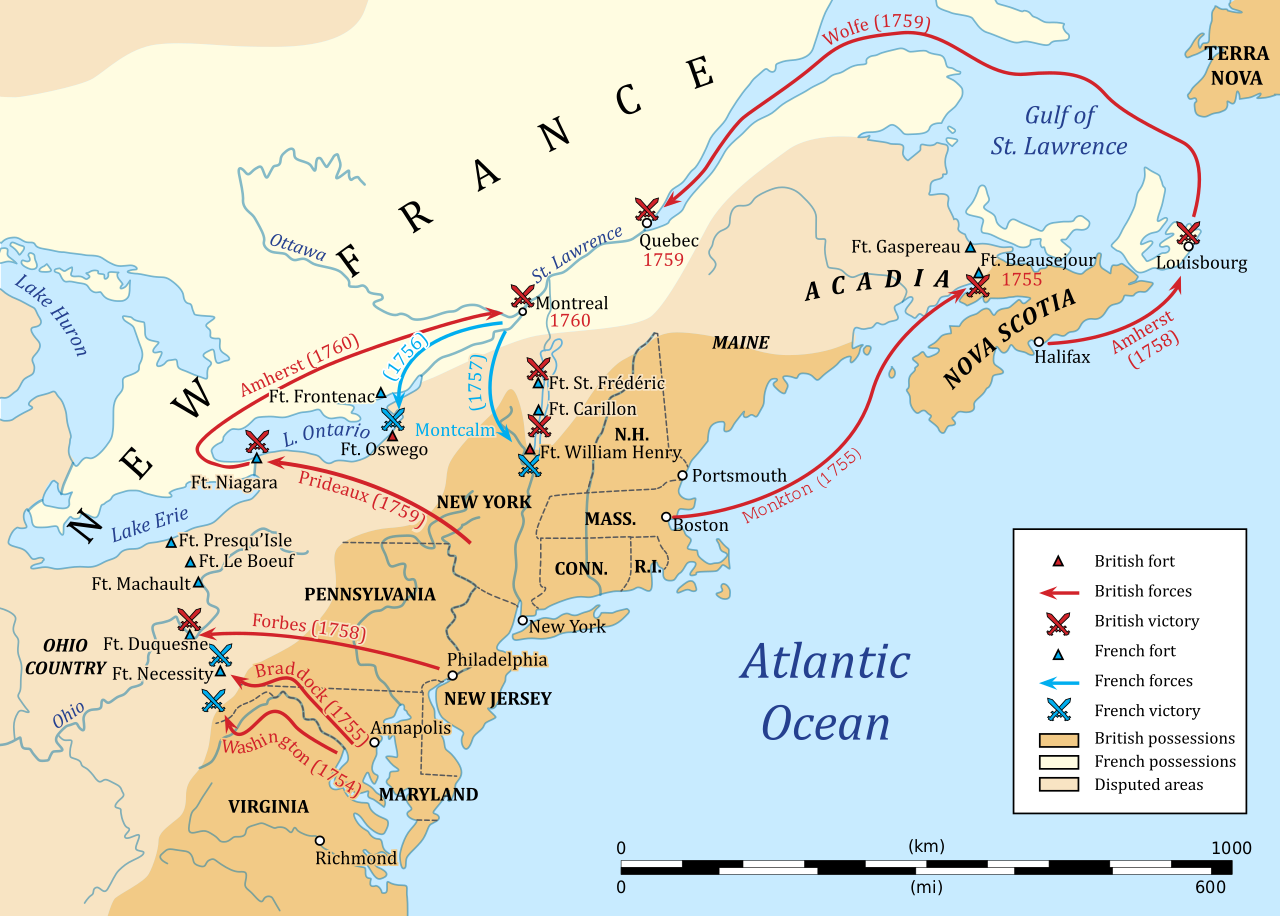 As soon as 1755, French military regiments are sent in America to support New France as the British threat intensifies. The presence of these military men does not go unnoticed: throughout the French and Indian War, many burials and marriages related to these events are recorded in parish registers. Some choose to settle permanently in Quebec and constitute the last group of immigrants under the French regime. The following record, on February 11th, 1759 in Charlesbourg, celebrates the marriage of “jean Schoumarcker dit prêtaboire [literal translation of the name: readytodrink !] soldier of the company of the Brenne in the regiment of Berry […] and of marie joseph richard”. 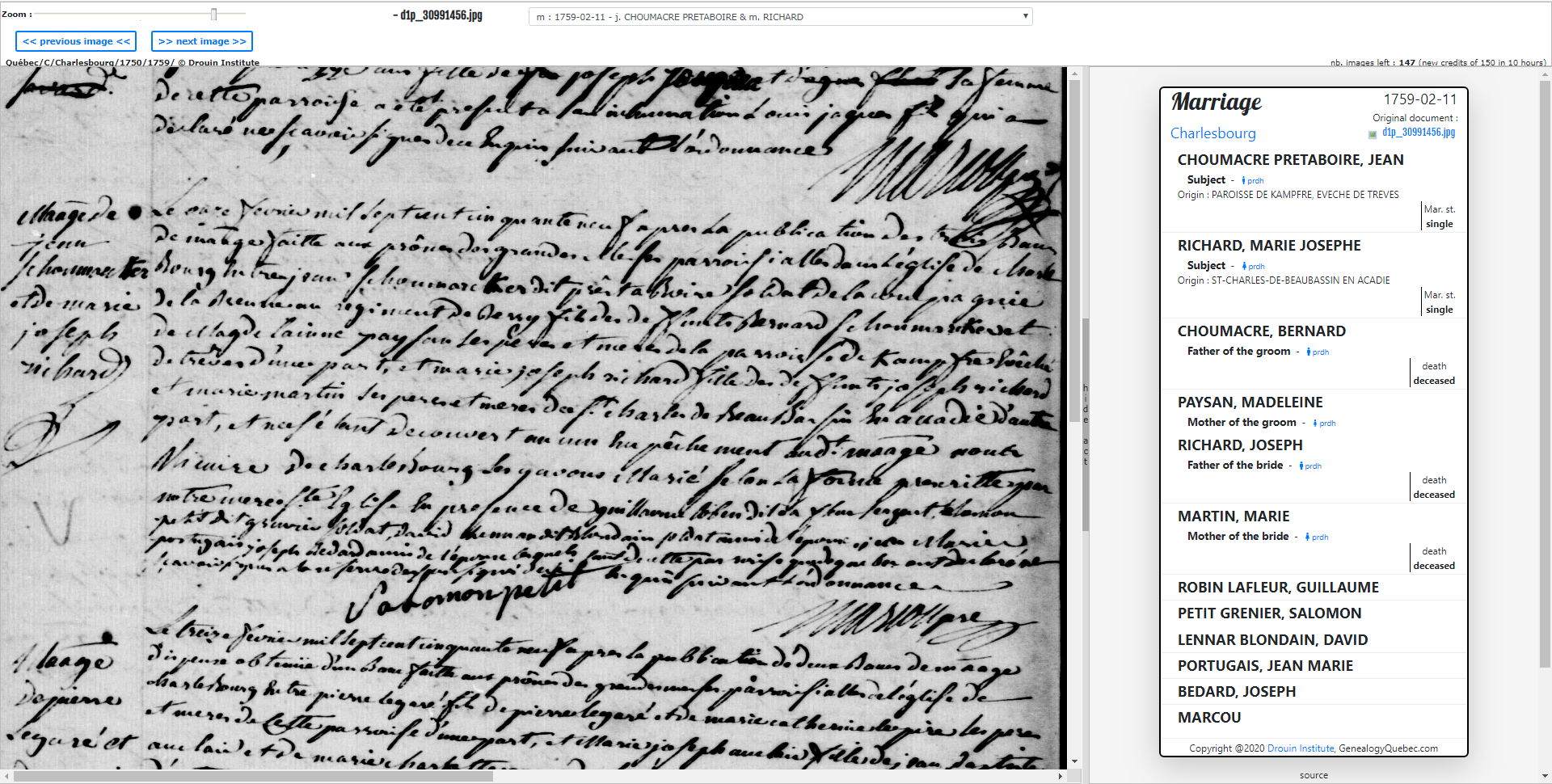 These soldiers are generally clearly identified in records, by their name and regiment. With a few exceptions: in February 1756, a few months after his arrival, a “young soldier of the Regiment of Languedoc” drowns in the Richelieu River. The priest omits to indicate his name but insists that his captain, the Sieur Guyon, could attest to his catholicity!

The First Nations also play a prominent role in this war, hence the name French and Indian War. The next record, from the summer of 1758, highlights their contribution: we learn about the death of Jean-Baptiste, a “sauvage micquemaque” in Fort Saint-Jean, Saint-Jean-sur-Richelieu, after his return from a “fight against the English” at Fort Carillon, south of Champlain Lake in what is today the State of New York.

The British become a major threat in New France when they sail up the St. Lawrence River with the objective of taking Quebec City. On July 31st, after two weeks of bombardments, the Battle of Montmorency (or Beauport) takes place. The French are victorious in this first fight for Quebec City.

The month of August is marked by a campaign of terror from the British, who ransack villages along the coast in hope of forcing the French Army to leave the protection of the Quebec City walls. Baie-Saint-Paul is deeply affected: the priest records the death of Charles Desmeules, “killed and the hair pulled up […] at the point of aulne by the english where they landed and burned the bottom of the st paul bay”, but also those of “several children dead when we had taken refuge in the woods” while “the English were at coudres Island and quebec city”.

Saint-Joachim loses its priest, “massacred by the english on the 23rd of this month leading his parish to defend it against the incursions and hostilities of the enemy”.

On both shores of the St. Lawrence River, parish registers show the urgency of the situation: buried in a hurry and “without ceremony because of the english”, numerous bodies are exhumed and inhumed again after the end of the war.

The conflict culminates in September 1759 at the Battle of the Plains of Abraham near Quebec City, as the British Army, the French Army, the Native warriors and the Canadian militia, composed of locals, fight for the city. This battle and subsequent events will be discussed in the second part of this article.