If you’ve ever done genealogical research in Quebec, chances are that you’ve encountered “dit names”, which are secondary family names associated with a primary name, sometimes even replacing it.

These abound in the nominative history of ancient Quebec. Their origins are multiple: military nicknames, nicknames related to a physical characteristic or to the place of origin, names of fiefs among nobles, mother’s name, father’s name, etc. Some go back to the early ancestors, others are introduced by descendants; some are transmitted, others not; some are specific to the entire family line, others only concern a subset.

The result of this is that an individual may be identified under a nickname or secondary surname at any time, with no way real way to predict when.

In the context of genealogical research, “dit names” can be seen as a second family name given to an individual.

Which is why you will find, on PRDH-IGD.com and GenealogyQuebec.com‘s LAFRANCE, a window dedicated to “nickname / dit name” associations. This window is located directly in the search engine. 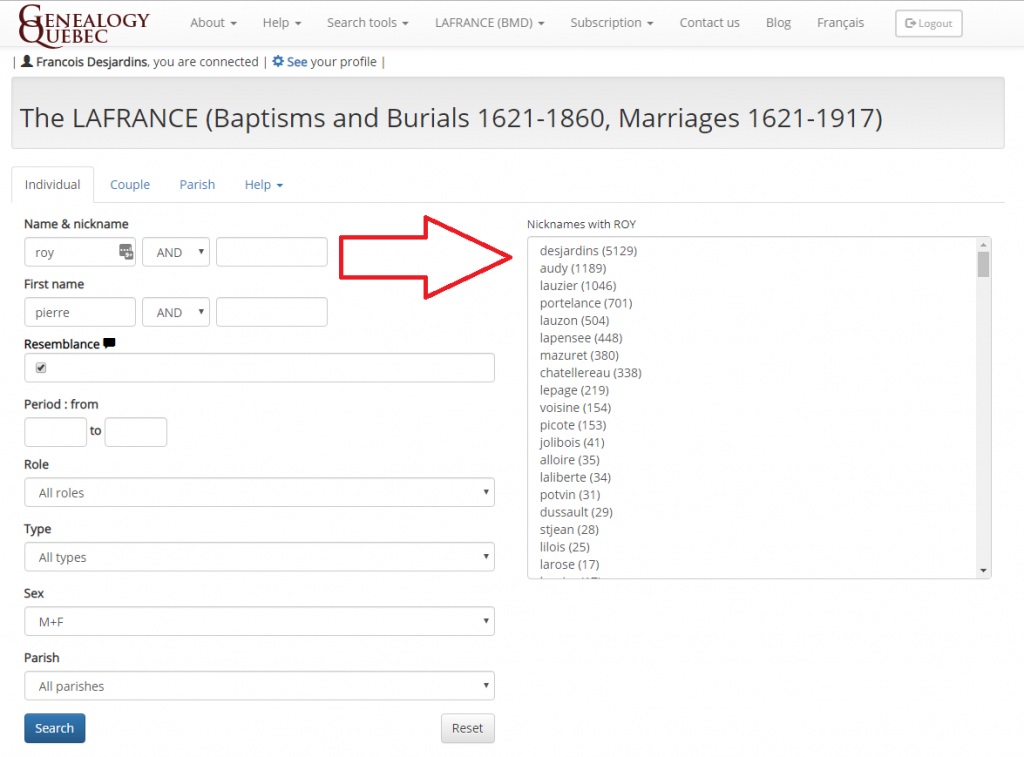 When you enter a surname in the search engine, you will see the “dit names” associated with this last name according to their frequency in the database. This tool is particularly useful since it can allow you to trace a line of individuals who have held different family names over the generations. For example, if you do not find the marriage of the parents of your ancestor Pierre Desjardins, you will know that it is possible for Pierre Desjardins’ father to be named Roy on his wedding record, allowing you to trace the record in question more easily.

“Dit names” in the context of genealogical research

“Dit names” can help you as well as hinder your genealogical research, hence the importance of being familiar with the concept.

On the one hand, “dit names” represent, in a record, an additional source of information to identify an individual. That is, an individual with a “dit name” will be easier to identify over the various records, as the combination of the two names should distinguish it from other individuals with more common names.

For example, if you are looking for an ancestor by the name of Pierre Tremblay, you may have difficulty distinguishing him from the dozens of other Pierre Tremblay who are his contemporaries. On the other hand, if your ancestor is named Pierre Tremblay dit Boucher, it should be much easier to identify him in the records as it is a more recognizable and unique name.

However, “dit names” can also be an obstacle in your search for your French-Canadian ancestors, especially if you do not take them into account when doing your research.

If you are not familiar with the “dit name” concept and are looking for records pertaining to your ancestor Pierre Roy, your research may omit several records where he is identified as Pierre Desjardins. This is why it is important to search for the both surnames individually when your ancestor has a “dit name”.

The PRDH-IGD (subscribe to PRDH-IGD) and GenealogyQuebec’s LAFRANCE (subscribe to Genealogy Quebec) search engines give you the ability to search for two last names at a time for a single individual. You can either search for both or one of the 2 names entered. To do so, select either “AND” or “OR” in the drop down menu located between the two name fields.

The search engine will then find all the individuals with one or/and the other of the selected names, which ensures you do not miss any records pertaining to your ancestor.

Wondering what combinations of surnames and “dit names” were most common at the time of your ancestors?

You can find out thanks to this free tool made available to you by Genealogy Quebec:

Name-nickname associations in the LAFRANCE

Simply enter the name you are interested in to obtain a list of all the names associated with it in one of the 3.6 million records contained in the LAFRANCE. These are listed in alphabetical order, and the frequency of each combination of names in the database is also indicated.

One Reply to “French-Canadian “dit names” and nicknames”