Contagious diseases have affected Quebec several times since the 17th century. Epidemics certainly bring their share of deaths, but each one of them contributes to the evolution of public health measures and beliefs about immunity. This article tells the story of the cholera epidemic that struck Quebec in 1832, and to a lesser extent in 1834, through contemporary newspapers, available in the Drouin Institute’s Miscellaneous Collections, and parish registers, available in the LAFRANCE tool and on PRDH-IGD.com. 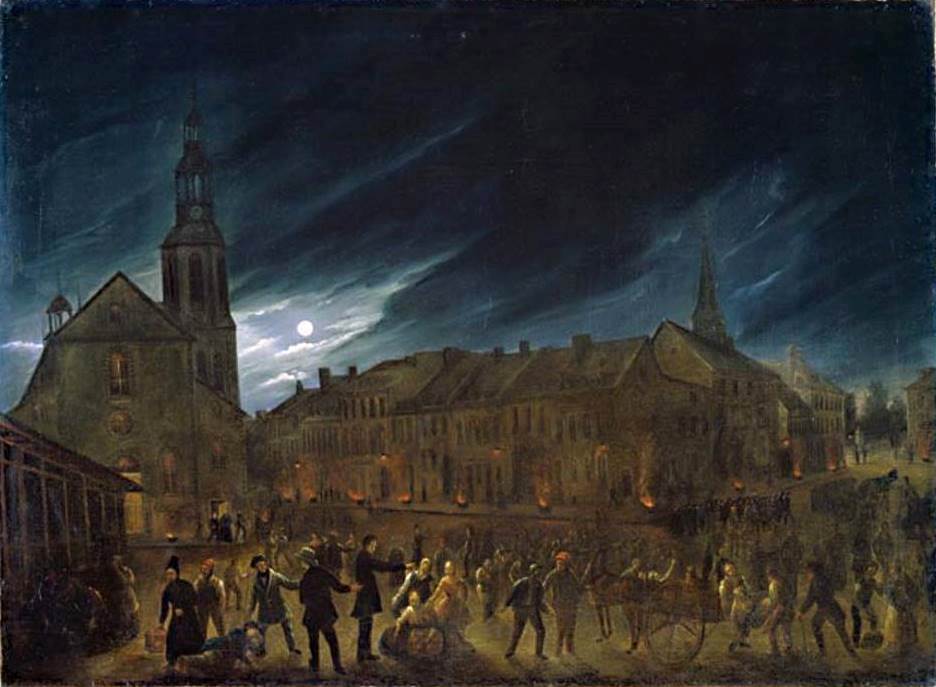 Named indifferently Asiatic Cholera, Spasmodic Cholera or Cholera Morbus, the disease, which was originally limited to Asia, spread during the 19th century in the Western world through a series of pandemics. Originating from India around 1826, the second cholera pandemic reached the British Isles in February 1832. Irish immigrants were responsible for the introduction of this infectious disease, which caused the first large-scale epidemic in Quebec.

In February 1832, the Grosse-Île quarantine station was created in anticipation of the arrival of cholera and started hosting immigrants before allowing them access to the port of Quebec City. The island, located fifty kilometers downstream from Quebec City, is now a national historic site.

Quebec City experienced the first outbreak of the epidemic in America. On June 4th, the Quebec Gazette announced the imminent arrival of the Carricks at the Grosse-Île station:

“Capt. Park of the Astrea, arrived yesterday, spoke [communicated with] the Carricks, [capt.] Hudson, from Dublin, at Grosse Ile, on Saturday [June 2nd, 1832]. The Carricks lost 42 passengers, her carpenter and one boy, on the passage, from some unknown disease. The remainder of the passengers and crew are now in good health.”

It was already known in America that this “unknown disease”, cholera, was wreaking havoc in Europe, and newspapers were following the situation very closely. In order not to create panic among the population, two days later, the Quebec Gazette reminded that:

“Rumours are again in circulation, and very generally, that the Cholera Morbus has got to the Quarantine Station, &c [etc.]. It is only necessary to repeat, that until some official statement appears on the subject, they are wholly to be discredited.”

The authorities confirmed via the newly created Board of Health that “The rumour of there being persons at the station sick of cholera, is entirely without foundation.” 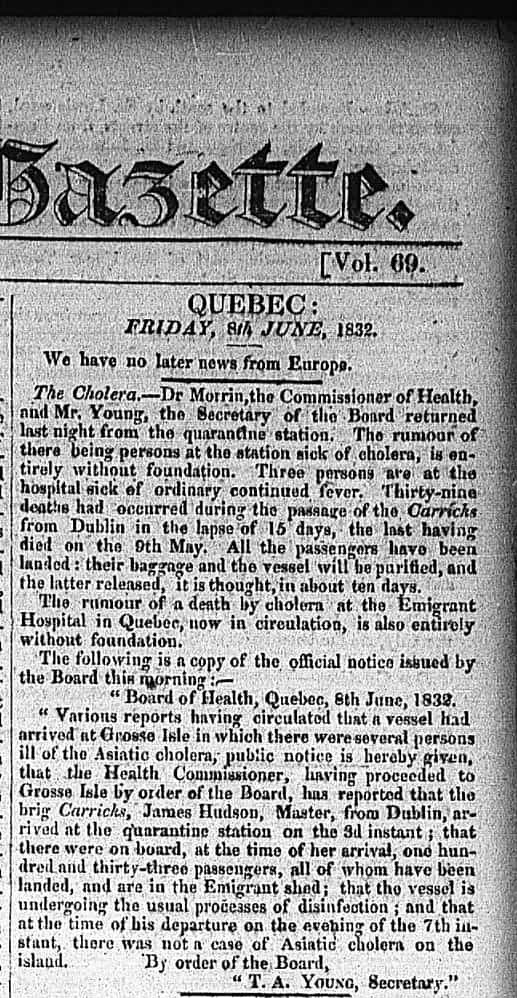 They indicated that the Carricks was undergoing disinfection procedures and were confident that cholera would not reach Canada. This conviction was based on a favourable opinion of the sanitary situation of the Canadian people:

« It has been found in every part of the world, that the Spasmodic Cholera uniformly seizes and destroys, with the rapidity of lightening, those who indulge in fermented liquors, and in intemperance of any kind, – the dissolute – the idle – the dirty, – all become its victims, while those who are cleanly, temperate and industrious, escape.

This is a matter for consolation and hope, especially for a people, who like the Canadians, in the rural districts particularly, are distinguished for their sobriety, industry and cleanliness ; and who, moreover, since they are exempt from the evils of extreme poverty, are proportionately secure from the more severe attacks of the disease.

If the Spasmodic Cholera therefore should appear among such a people, it will probably be very limited in its extent, and very mitigated in its severity. » 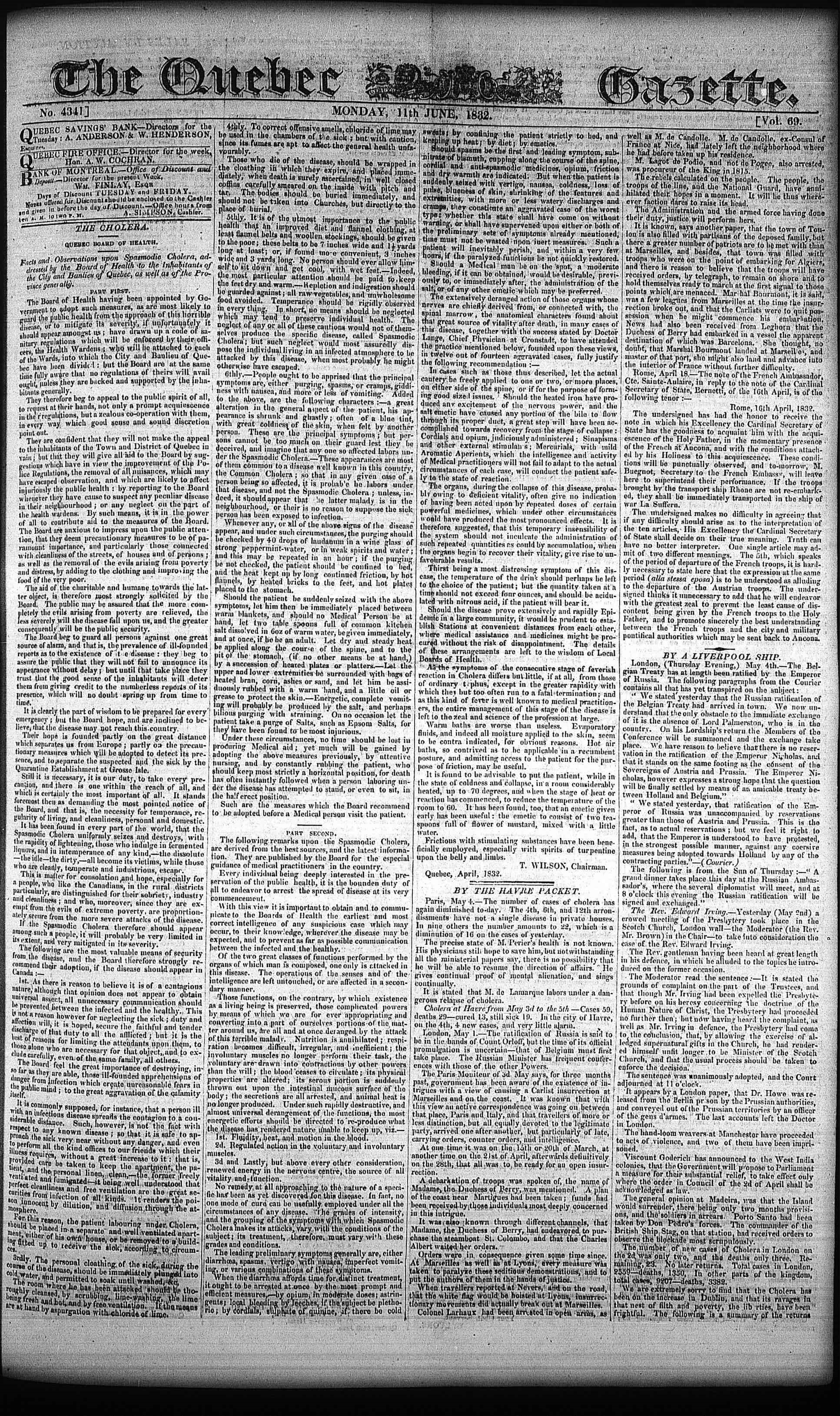 Indeed, cholera was the deadliest in disadvantaged neighborhoods as contagion was favoured by high population density and poor hygiene. Contrary to the Board of Health’s projections, the following table, published on July 2nd, 1832 in the Quebec Gazette, only one month after the arrival of the Carricks, shows a rapid evolution of cases of cholera in Quebec City hospitals. The absence of strict measures to contain the disease allowed cholera to reach Montreal, which would also be hit hard. 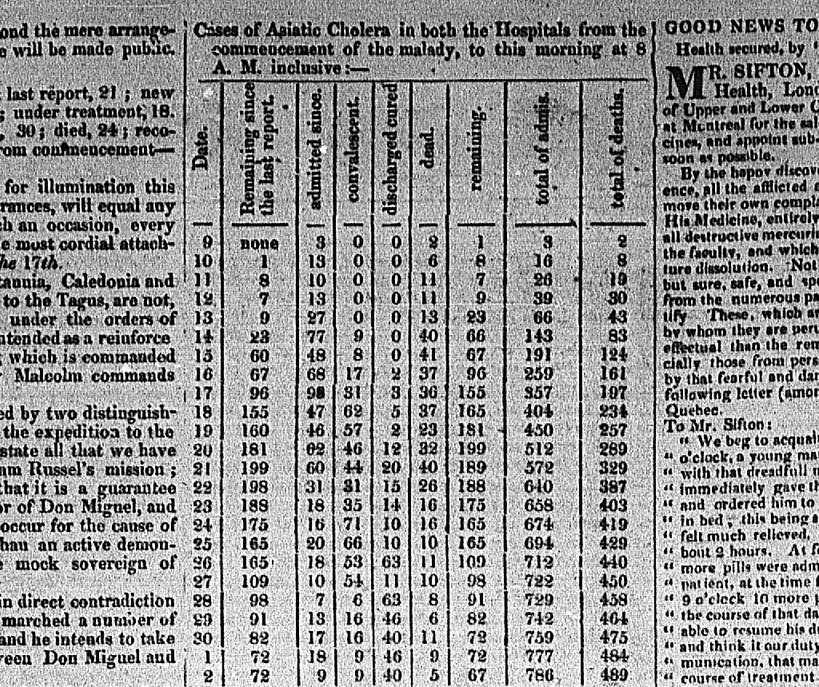 Among the environments most at risk, the unsanitary conditions and overcrowding in prisons made them particularly vulnerable to the development of the epidemic. On June 17th, 1832, just two weeks after the Carricks’ arrival at Grosse-Île, “two men of unknown names who died of Cholera morbus in this city’s prison” were buried in Montreal.

Yet high society was not spared. The following record, from Beauport, near Quebec City, indicates that Marie Louise Fleury De La Gorgendière died of cholera on June 2nd. She was the widow of the Honourable Louis Antoine Juchereau Duchesnay, Lord of Beauport, politician and military man.

Reports from the time indicate that cholera could strike very quickly: it was not uncommon for a healthy-looking individual to die within a day from rapid dehydration caused by extreme diarrhea. This reality is reflected in parish records, as the following one reveals that Angélique Angers died on August 8th in Neuville “of cholera after ten hours of illness“.

The Saint-Louis Cemetery in Quebec City, located at the corner of Grande Allée and De Salaberry Avenue, opened in 1832 to accommodate cholera victims. It quickly gained the nickname of the Cemetery of the Choleric and was a resting place for the dead of cholera and typhus until 1855.

Deaths piled up at such a rate that priests increasingly resorted to mass burials. Here is the first occurrence of such a burial of cholera victims:

“On June thirteen, one thousand eight hundred and thirty-two, we Deacon of this Diocese undersigned, by special authorization from the Bishop of Quebec, buried in the Saint Louis Cemetery fifty-four individuals, the names of whom we have not been able to obtain, all deceased of Asiatic Cholera at the Emigrant Hospital, and of professions and ages unknown to us.”

Montreal and Quebec City, the two large cities of Quebec, each experienced a few thousand deaths as population density and movements increased contagion. However, cholera also raged in the countryside. Let us look at the case of this family from La Prairie, in the Montérégie region: Félicité Denault and her newlywed daughter Émilie Chabot both died on June 23, 1832. Three days passed before their husband and father Louis Chabot joined them in the grave. This family had already been hit hard by child mortality, which had struck at least seven of their twelve children. 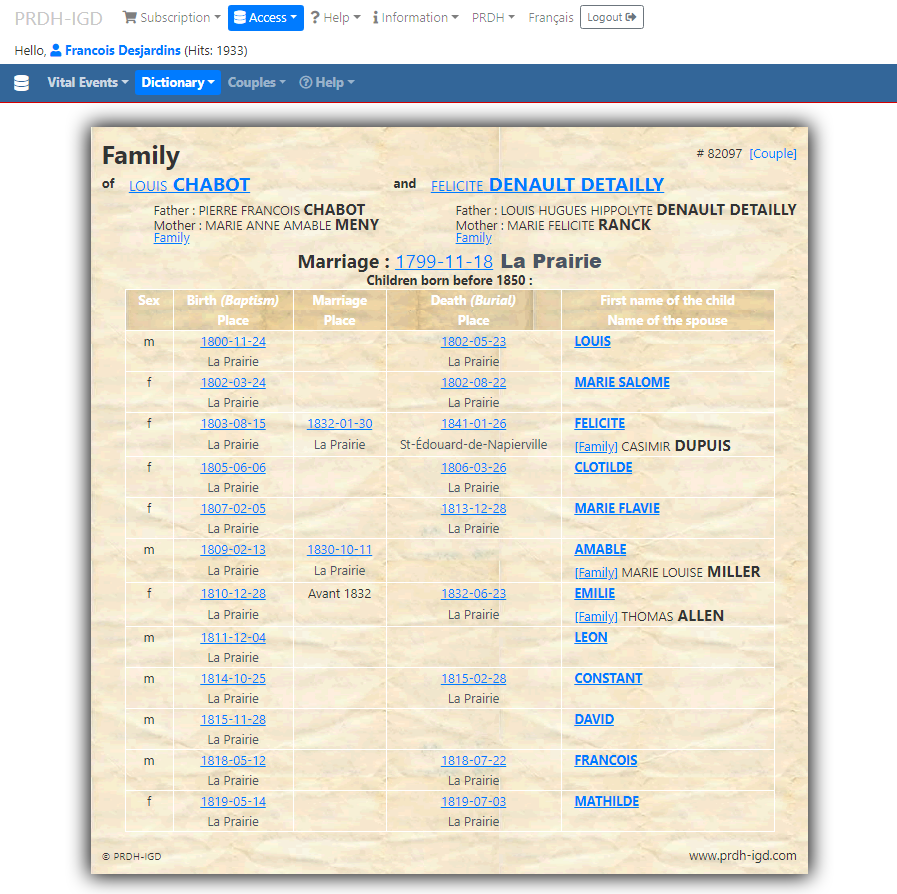 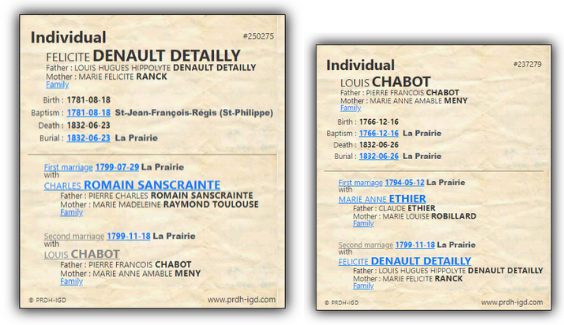 Registers also show that the epidemic traveled beyond Canadian borders through the frequent comings and goings of French Canadians who had migrated to the northern United States. In February 1833, the parish priest of Marieville, in Montérégie, recorded the death of Edouard Bérard, 11 years old, “who died on August 24th in Franklin, Franklin County, State of Vermont, of the colera“. The records show that his youngest brother, Marcel, was born in Franklin and was baptized in Marieville on June 13th, 1832. Circumstances suggest that it was during this family trip that the contagion could have reached young Édouard.

A second wave of the cholera epidemic hit in 1834 but turned out to be much less deadly than the first. It was then that the registers of St-Luc-de-la-Grosse-Île opened and started recording baptisms, marriages, but especially burials of Irish immigrants in quarantine on the island.

“This register, which contains eighteen sheets, including this one, was by us one of the Judges of the Court of King’s Bench for the district of Quebec, undersigned, stamped and initialed on each sheet to serve for the recording of Baptisms, Marriages and Burials which will occur at the Quarantine Station established at Grosse-Isle, the so-called isle being dependent on the parish of St. Antoine de l’Isle aux Grues. 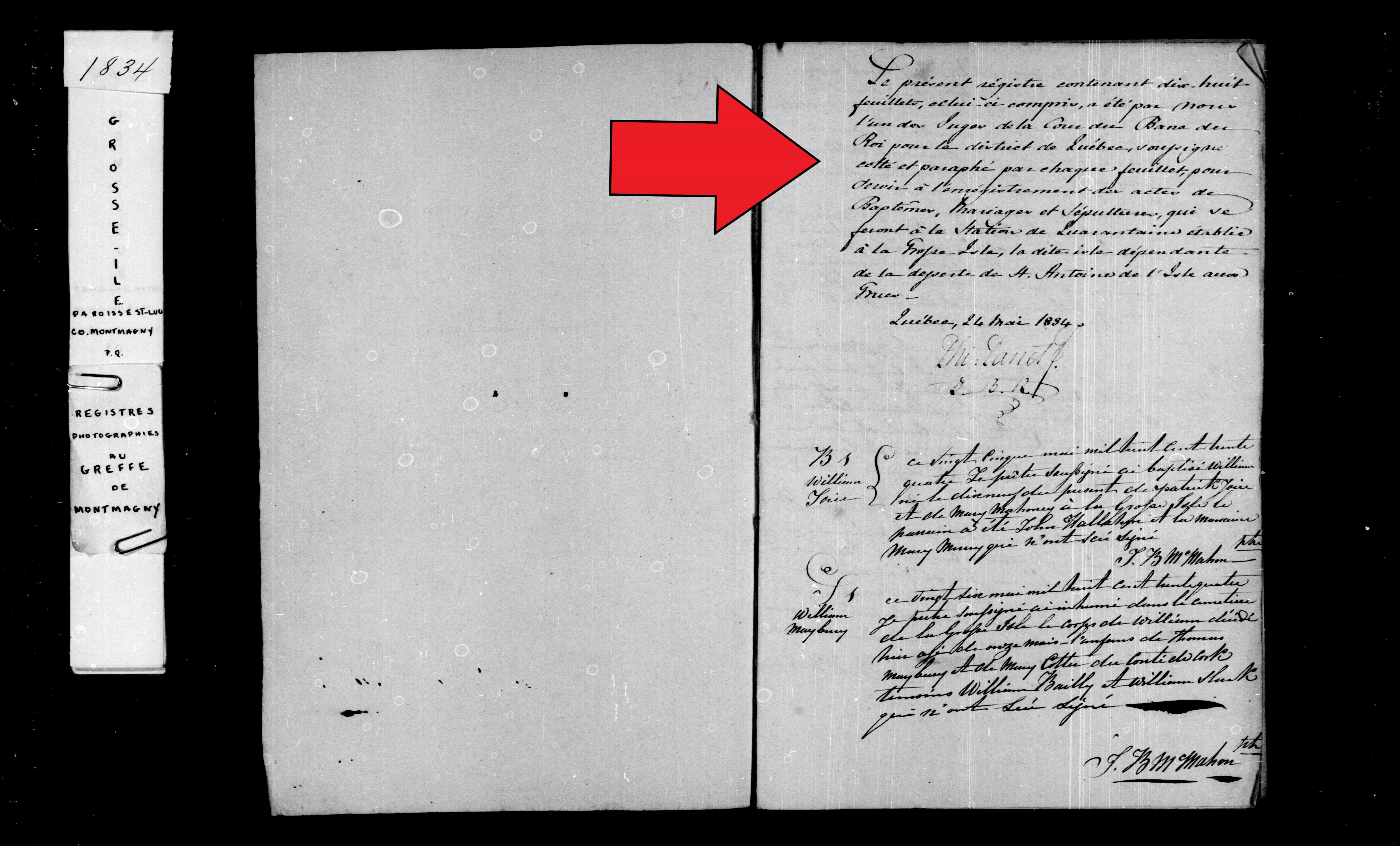 Cholera returned to Quebec during the third pandemic in 1849 and 1854. This dark episode contains its share of tragic stories but was the source of various innovations in terms of public health measures, in particular the creation of the quarantine station of Grosse-Île and the Board of Health. The knowledge and skills acquired during this period proved invaluable in managing subsequent epidemics.