The LAFRANCE is one of 15 tools available to Genealogy Quebec subscribers.

In addition to these Catholic records, all of Quebec’s Protestant marriages from 1760 to 1849, as well as 68 401 Catholic baptisms and burials from between 1862 and 2019 are included in the database. A link to the original parish document is included with every record.

Some 1 700 000 marriage records were recently imported into the LAFRANCE, adding to the records mentioned above:

Finally, tens of thousands of baptisms, marriages and burials from Ontario and Acadia as well as Protestant records from Quebec are in the process of being added to the collection.

You will find these parish records under two formats on the LAFRANCE:

Original documents – a digitized image of the original parish register, as it was originally drafted.

Record certificate – Every record in the database is indexed under what we refer to as a certificate. The certificate contains all the relevant information extracted from the original record such as the names, dates, roles, occupations, relationships, marital status, etc.

The LAFRANCE is divided into 3 research sections: Individual, Couple and Parish. These sections allow you to search for an individual, a couple or for records recorded in a specific parish, respectively.

The Individual search engine allows you to search for all the mentions of an individual in the records available in the LAFRANCE. 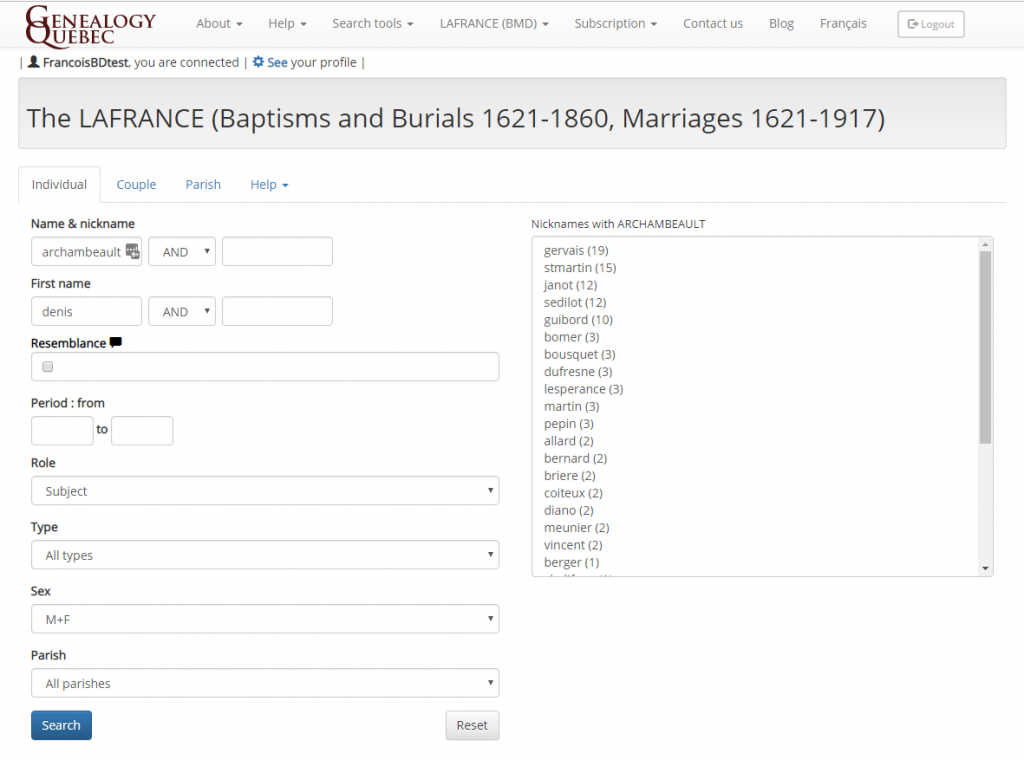 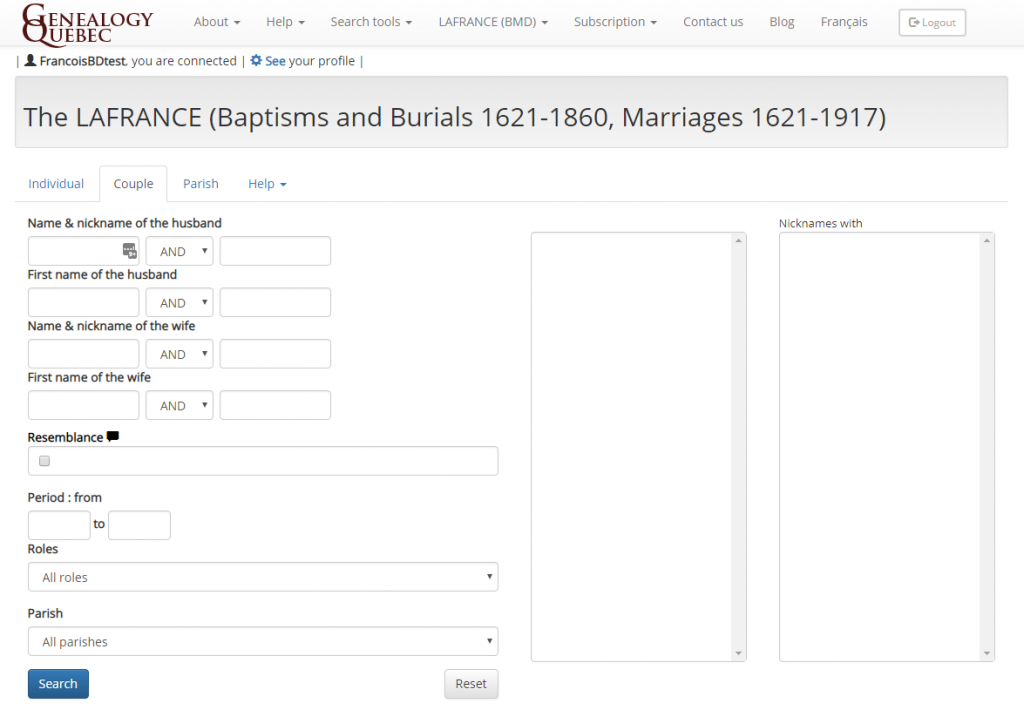 The Parish search engine allows you to search for all the records of a specific parish. You can limit this search to a specific date range and type of record (baptism, marriage or burial).

To begin a search, simply fill in the field(s) of your choice and press Search. You will then reach a list of results based on your search criteria.

Clicking on the name of the parish will take you to the location of this parish on our interactive map of Quebec based Catholic parishes.

To view the record certificate, click on the date associated to that record in the list of results. 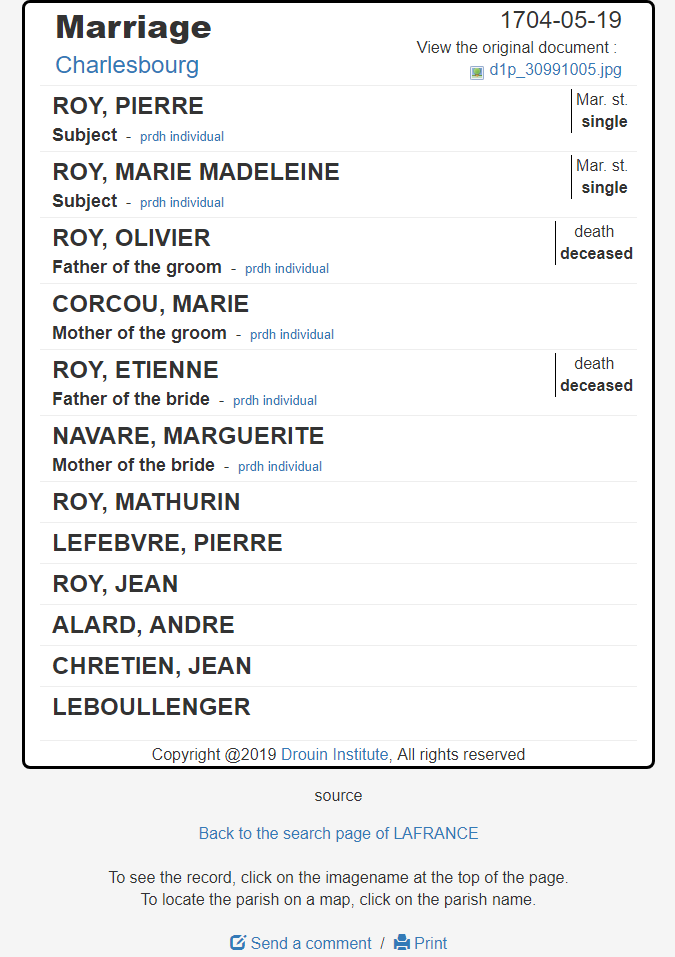 To view the original document itself, click on the image link found under the date of the event. 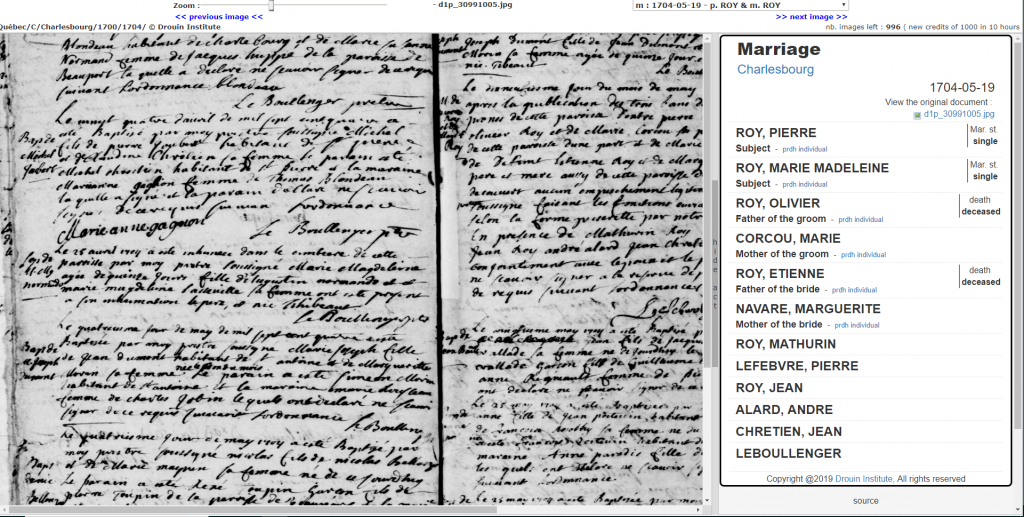 This is why the LAFRANCE includes a Nickname tool, which gives you a list of “dit” surnames commonly associated with the last name you are researching. 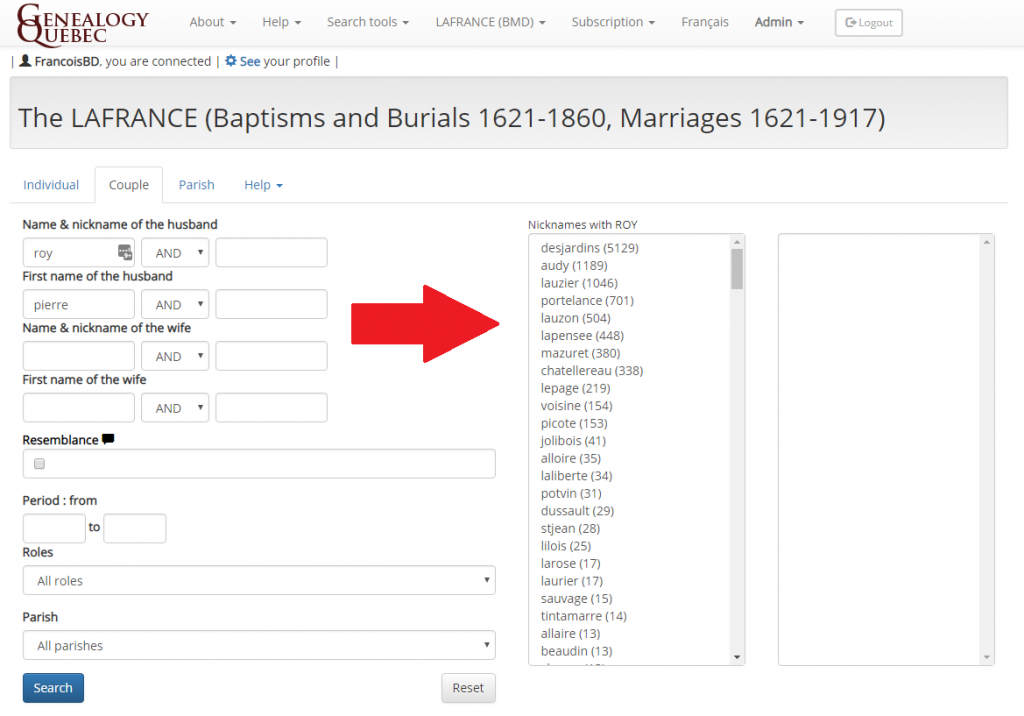 When you enter a surname in the search field, a list of “dit” names commonly associated to that surname will appear in the box to the right, ordered by frequency.

This tool is very useful because it can allow you to trace a line that has gone under different family names over the generations. For example, if you are unable to find the marriage of the parents of your ancestor Pierre Desjardins, you will be aware of the possibility that the father of Pierre Desjardins bore the name Roy on his marriage, allowing you to find the record in question.

You can learn more about French-Canadian “dit names” and nicknames in this article on our blog.

The LAFRANCE search engine is equipped with a name dictionary, which associates a name with all of its variations. For example, a query for an individual with the surname Gauthier will prompt the search engine to look through the database for any mention of the name Gauthier as well as any of its variations, such as Gautier, Gaulthier, Gotier, etc. Thus, it isn’t necessary to manually search for multiple variations of a name.

You may browse the LAFRANCE name dictionary at this address.

Please note that when searching on the LAFRANCE, the result list will always show the standard spelling of the name(s) you searched. However, the record certificate will give you the specific spelling used in the original record.

The resemblance function, otherwise known as the likeness function, makes it possible to search for a name as well as any other name that resembles it. The resemblance function differs from name standardization because it not only includes all of the variations of a name, but also all of the names that are similar to it in terms of pronunciation or spelling. For example, a search for Gauthier, which will include all of the variations given earlier, will also include the names Gonthier, Vauthier, Gouthier, Authier as well as their numerous variations. 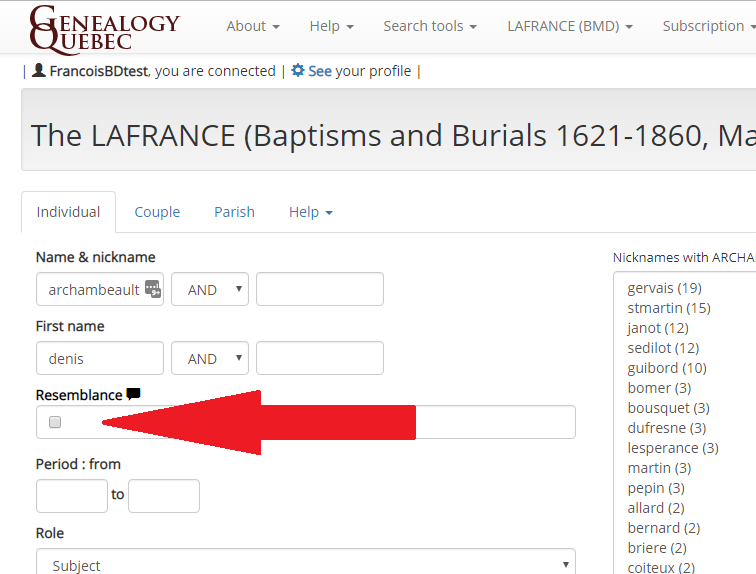 We recommend that you keep the resemblance function turned on at all times.

The LAFRANCE’s search engine allows searching for many variables, which makes it tempting to fill as many fields as possible when using the tool. However, we recommend that you keep your initial search as vague as possible, and clarify it as needed by adding one piece of information at a time. When the name or surname searched is rare or unusual, it is rarely necessary to add more information to the search.

The more precise a search is, the more likely it is to omit the record you are looking for, as every single field must match.

For example, an initial search could start with the surname and first name of the subject. If the number of results is too high, a variable such as the year of the event or the surname of another individual mentioned in the record can be added. Often, simply adding a third variable is enough to narrow the search down sufficiently.

We also recommend, if necessary, to try several combinations of names when looking for a record. For example, imagine that we are looking for the marriage of Louis Lamontagne and Cécile Dubé. It is possible, for various reasons, for one of the spouse to have gone under a partially different name on their marriage record. If searching for “Lamontagne” as the name of the husband and “Dubé” as the name of the wife does not allow us to find this marriage, it may be interesting to try other combinations:

And so on. As a result, if an error exists in one of the first or last names of the subjects, we will still be able to find the record.

Finally, note that you may use the “%” character in order to search for part of a name. For example, a search for “Rog%” will find all of the records where an individual bearing a name that starts with “Rog” is mentioned. This allows you to widen your search even further, if necessary.

Accessing a PRDH-IGD individual file from a LAFRANCE certificate

If you are subscribed to both PRDH-IGD.com and GenealogyQuebec.com, you can view the PRDH-IGD individual file of an individual mentioned in a LAFRANCE certificate with a single click.

To do so, make sure you are logged into both websites, and then click on the “prdh individual” mention found on the LAFRANCE certificate you are viewing.

You can also learn more about the similarities and differences between PRDH-IGD.com and GenealogyQuebec.com on this page.