The keeping of Quebec birth, marriage and death records dates back to the very beginnings of the French colony in North America.

In 1621, the first Catholic parish register opens, recording the births, marriages and burials of the population of the young colony.

In the 1760s, following the conquest of New France by the British Empire, and the arrival of many individuals of Protestant faith in the province, the Catholic Church looses its monopoly in the documentation of birth, marriages and deaths in Quebec.

In 1926, the State establishes the Registre de référence à l’état civil, which didn’t replace but rather complemented the practice of recording birth, marriage and death records in churches. This register includes a majority of the marriages and deaths recorded in the province between 1926 and 1997. It can be consulted with a subscription on Genealogy Quebec at this address. 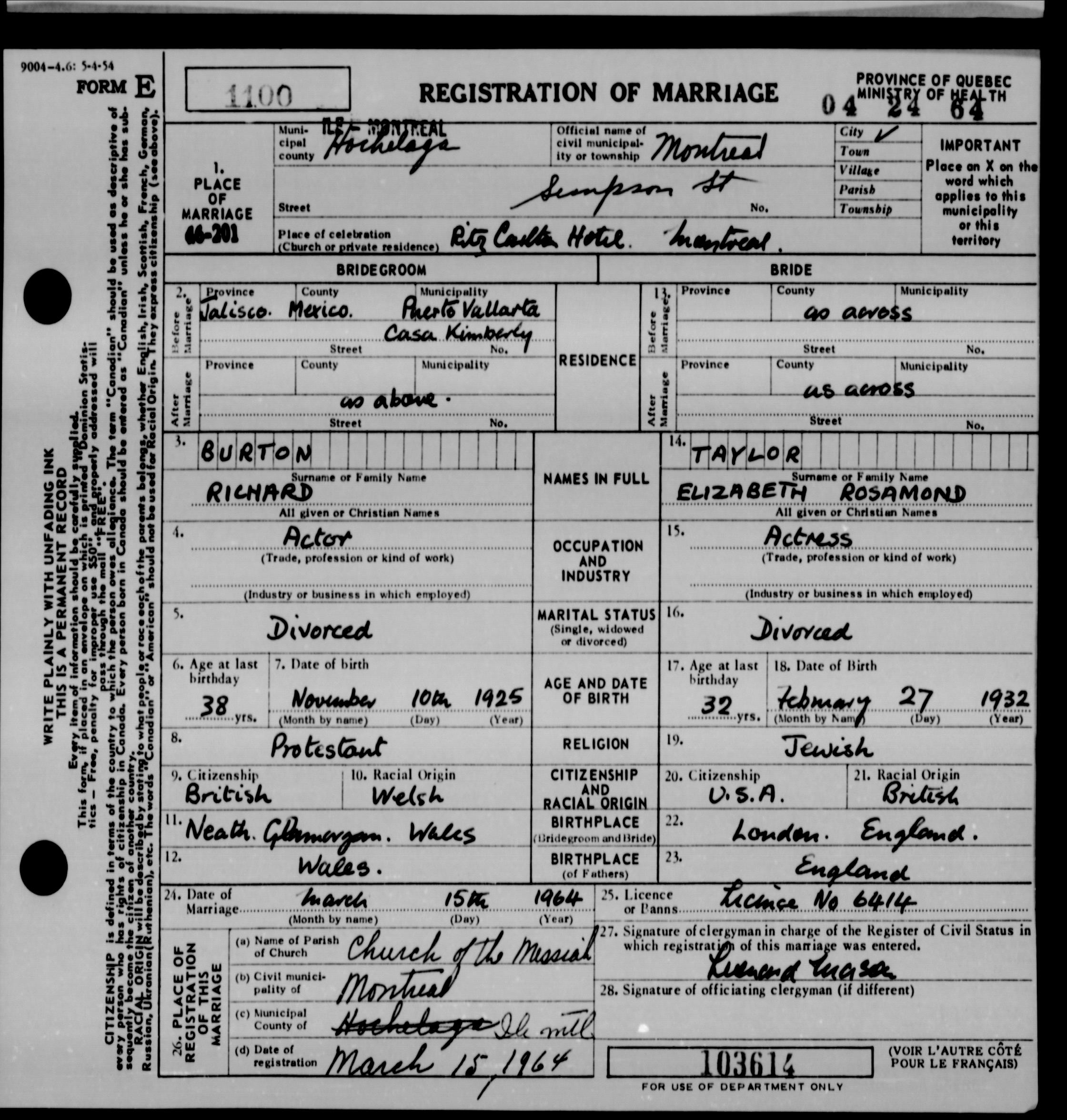 In 1994, Quebec centralizes the registration of its population’s vital events with the creation of the Direction de l’état civil. The vast majority of these documents are not publicly available.

How Quebec birth, marriage and death records are used in genealogy

Several databases containing Quebec birth, marriage and death records exist on the Web, but the most complete is the LAFRANCE, available on Genealogy Quebec. We will use it here to illustrate the principle explained above.

To begin our research, we need a starting point, a marriage from the desired lineage. For demonstration purposes, we will be using the marriage of the great-grandparents of the author of this article, François Eugène Desjardins and Anna Jacques.

We begin with a search for the spouses in the LAFRANCE. 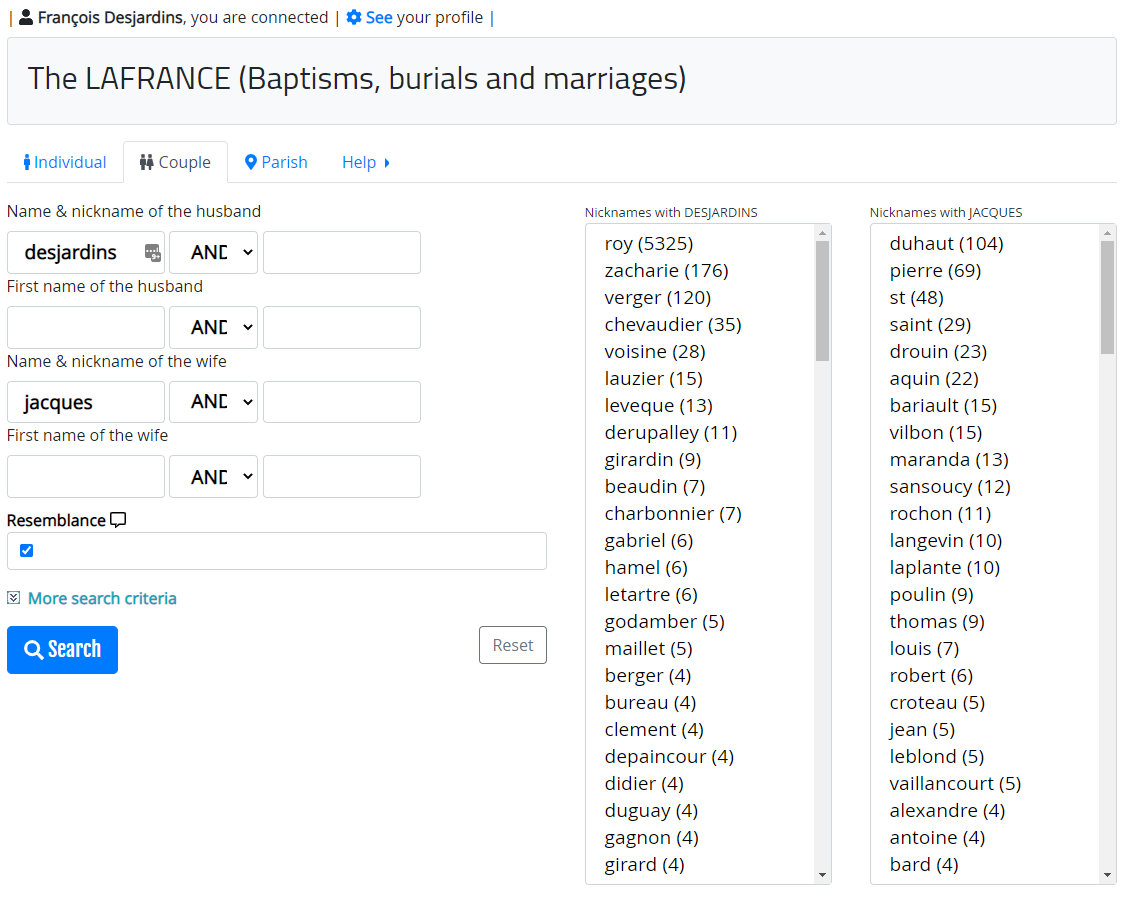 This allows us to find their marriage record, in 1907. 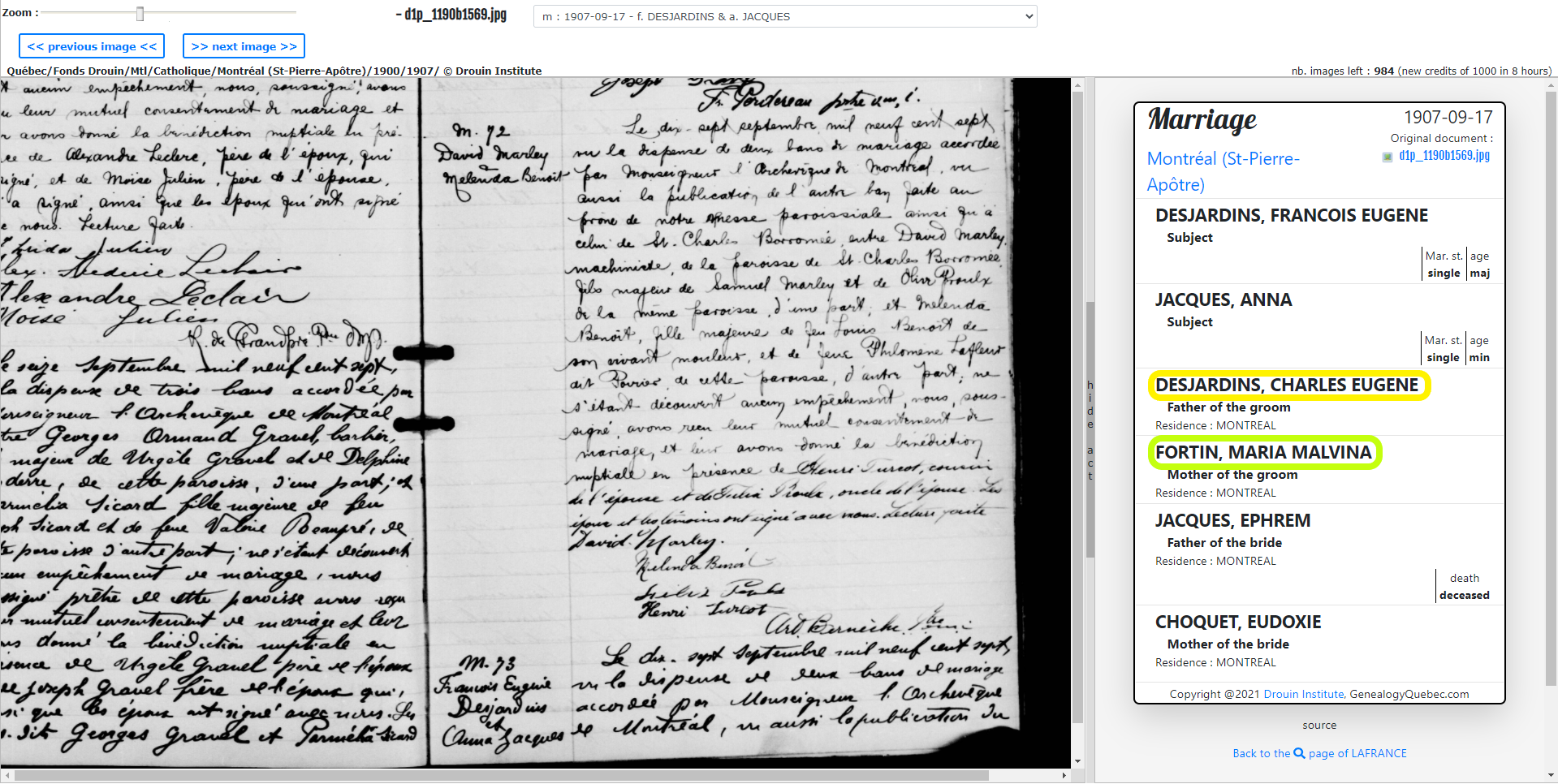 We will now search for their marriage. 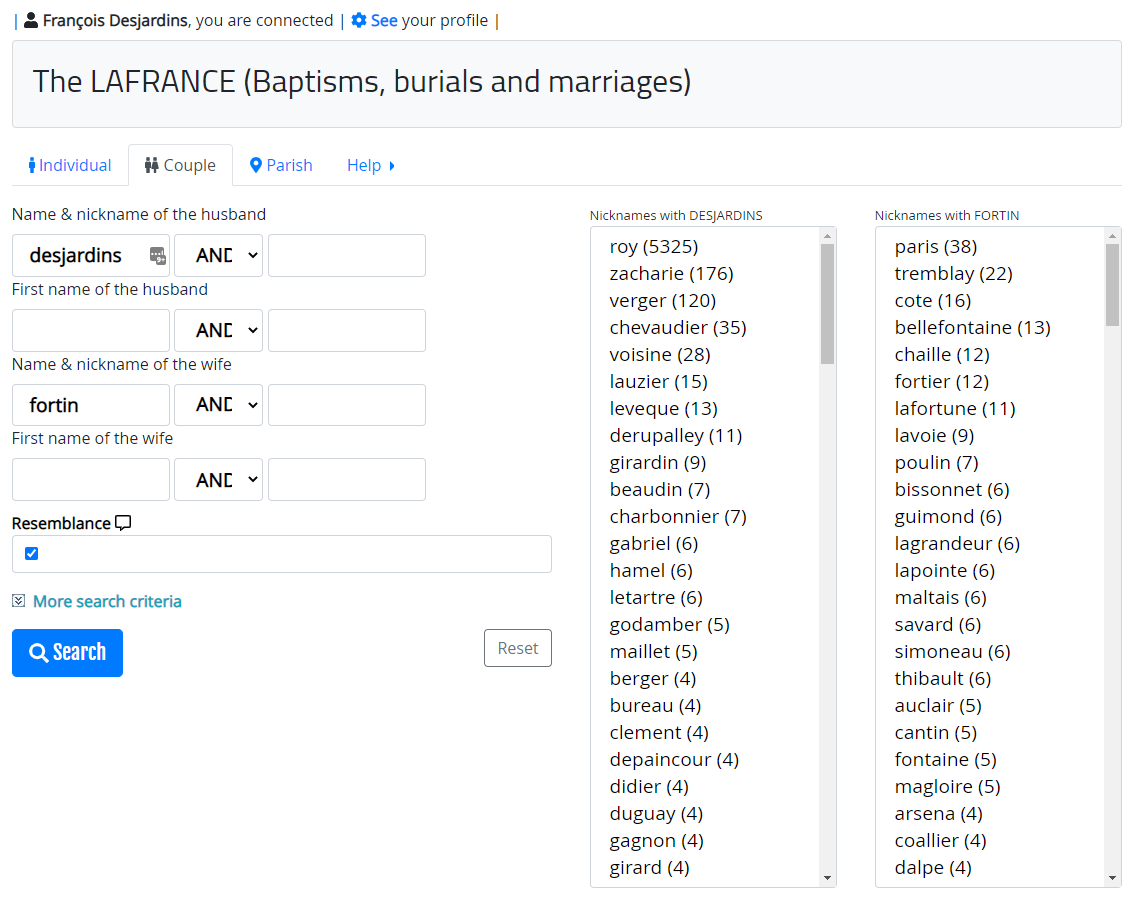 Again, this search leads us to their marriage record, in 1864

This process is repeated for each generation, until we arrive at the first immigrant of the Desjardins line in Quebec, Antoine Roy dit Desjardins, who’s marriage record can be seen below. 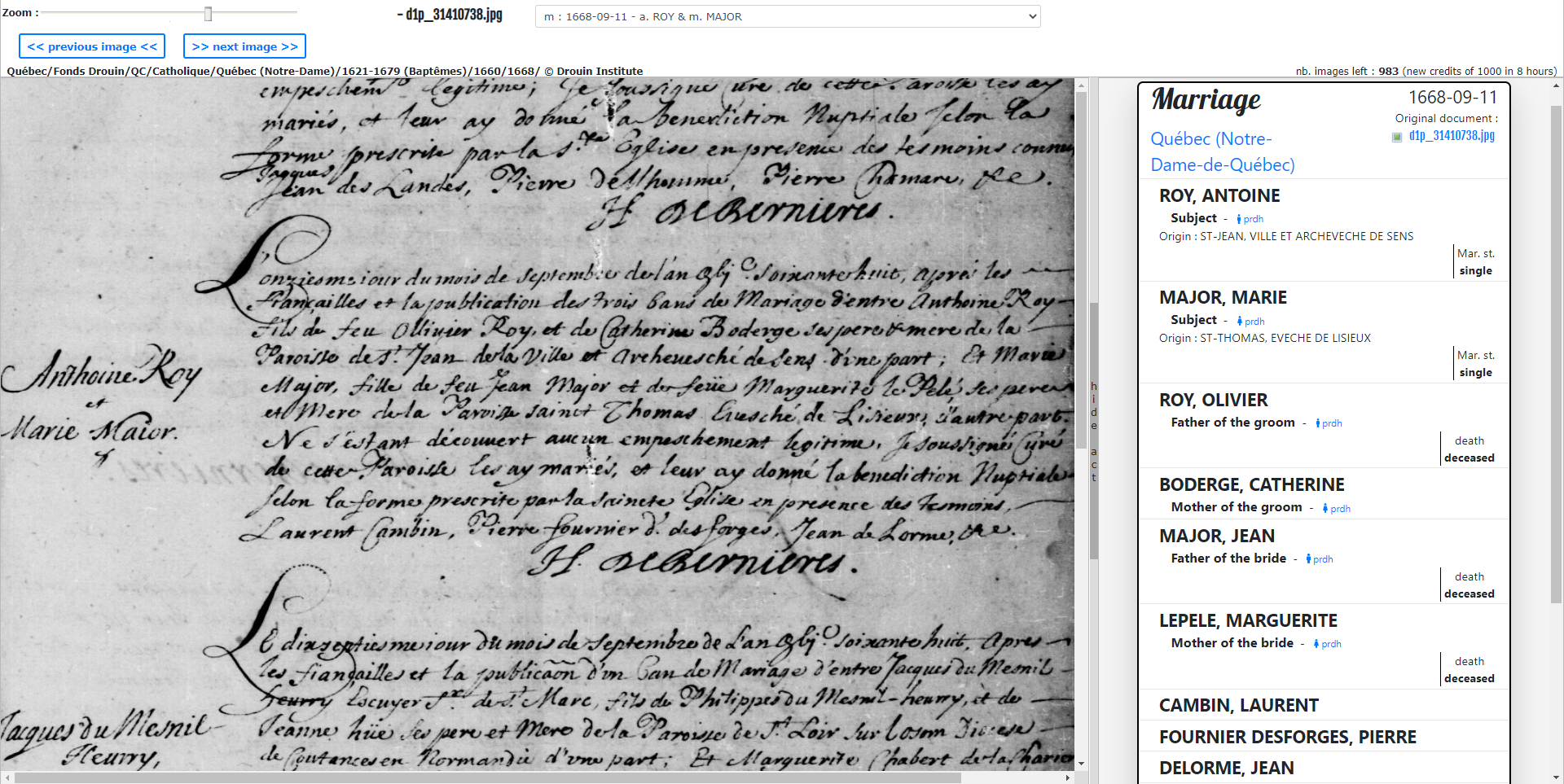 Births and deaths, on the other hand, can be used to paint a more complete picture of the lives of one’s ancestors.

For example, PRDH-IGD‘s “family files” group together all the vital events (baptisms, marriages and burials) related to a family unit. 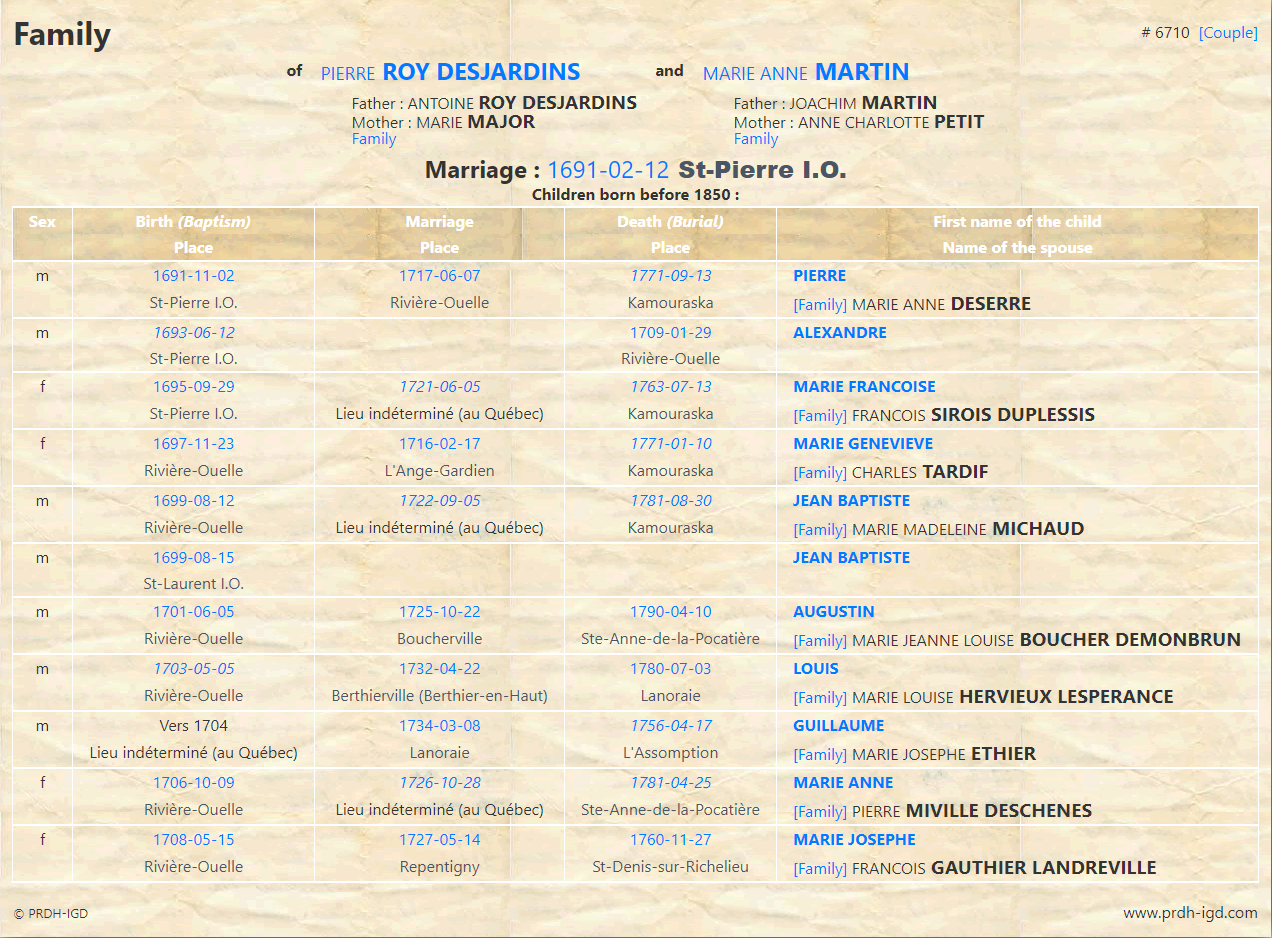 Family file of Pierre Roy Desjardins and Marie Anne Martin, with their children listed as well as links to the baptisms, marriages and burials of every individual mentioned.
Source: Family File 6710, PRDH-IGD.com

This global portrait, drawn from the baptism, marriage and burial records of the Catholic Church, gives us a unique insight into the lives of our ancestors and their migratory movements over the years.

Whether consulting a marriage, a birth or a death record, one can hope to learn the names of the involved parties and their parents, the date and place of the event being recorded, various additional information such as the place of residence or origin of the individuals mentioned, their marital status, age, and more. That’s a lot to learn about our ancestors!

Quebec is recognized worldwide for the comprehensiveness of its genealogical collections, and there are many sites offering access to Quebec birth, marriage and death records on the Internet.

Genealogy Quebec subscribers have access to the largest collection of Quebec records available on the internet. These can be found in various formats on the site: church parish records, civil government records, baptism, marriage and burial records, vital event register indexes, and more. The majority of these documents can be found in the LAFRANCE tool, a detailed index with a link to the original document of several million civil and religious records from Quebec. The tool is equipped with a search engine allowing you to browse the following documents:

A subscription is necessary in order to access the collections available on Genealogy Quebec. You can subscribe at this address.

PRDH-IGD is a directory of ALL vital events (baptisms, marriages and burials) recorded by the Catholic church in Quebec and French Canada from 1621 to 1849, as well as a genealogical dictionary of families commonly referred to as “Family Reconstructions”. The PRDH-IGD database contains over 2,500,000 records.

What makes PRDH-IGD a unique resource is the structure of its database. In addition to baptism, marriage and burial records, PRDH-IGD contains what are called individual and family files.

Every individual mentioned in a record in the database receives their own “individual file” in which all the information available on the individual is centralized.

Similarly, every married couple is assigned a “family file” which fulfills a similar role as the individual file, but in relation to a family unit. 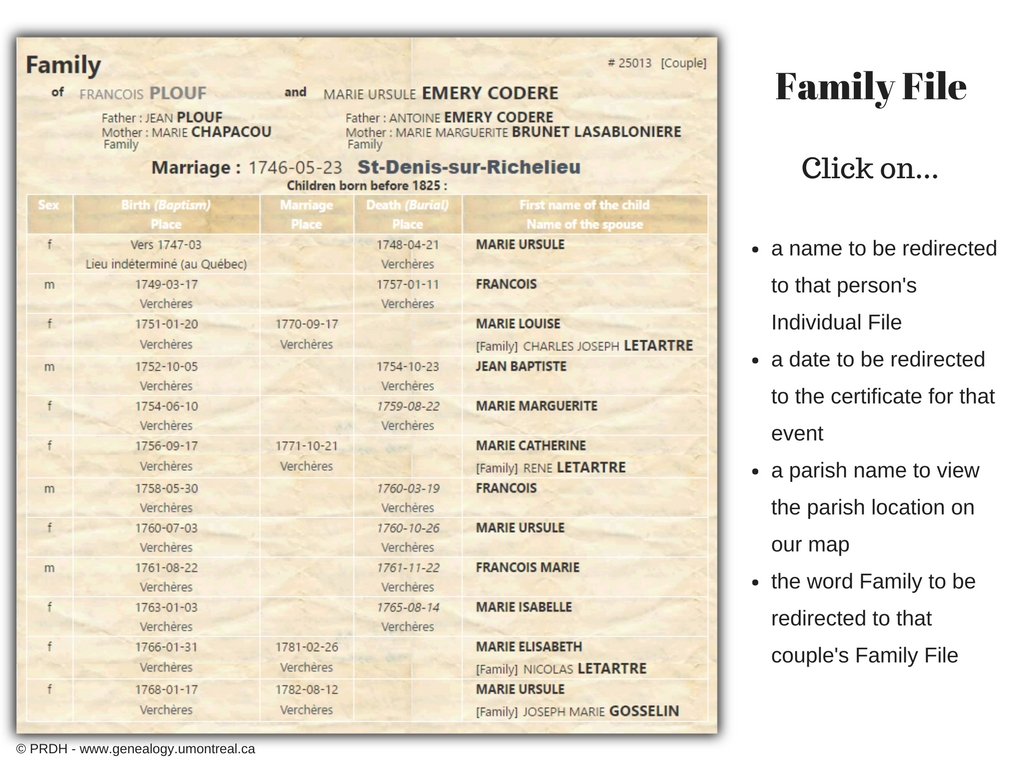 The family file lists all of the couple’s children and provides a link to the events where these children are mentioned.

Ultimately, the PRDH-IGD database can be described as a massive family tree encompassing every Catholic individual who lived in Quebec between 1621 and 1849, or in other words, almost every single ancestor of the French Canadian population of America.

A subscription is necessary in order to use the PRDH-IGD database. You can subscribe at this address.

BAnQ’s website offers access to a digitized version of the parish registers of Quebec up to 1916, which can be consulted free of charge at this address.

Unlike the copy of this collection available on Genealogy Quebec, BAnQ’s version is not indexed. This means that you have to navigate through the church register manually, one page at a time, in order to find the desired record. Therefore, it is necessary to know the year and the parish in which the event was recorded in order to find it.

Joining a genealogical society can be a great way to access numerous collections of birth, marriage and death records, as they specialize in the preservation of genealogical and historical archives from their region. In addition, the volunteers and employees of the societies can guide you in your research and help you find the documents you are looking for.

You will find a list of genealogical societies in Quebec sorted by region at this address.