Marriages and Deaths 1926-1997 is one of 15 tools available to Genealogy Quebec subscribers.

It is a detailed index of marriage and death forms recorded in Quebec between 1926 and 1997,  all religious denominations included. In total, this collection contains 5 286 169 forms. The original document can be viewed for the marriages.

You can browse the Marriages and Deaths 1926-1997 tool as well as tens of millions of historical and genealogical documents by subscribing to Genealogy Quebec today!

The Marriages and Deaths 1926-1997 tool is equipped with 2 search engines; one for the marriages, and one for the deaths. 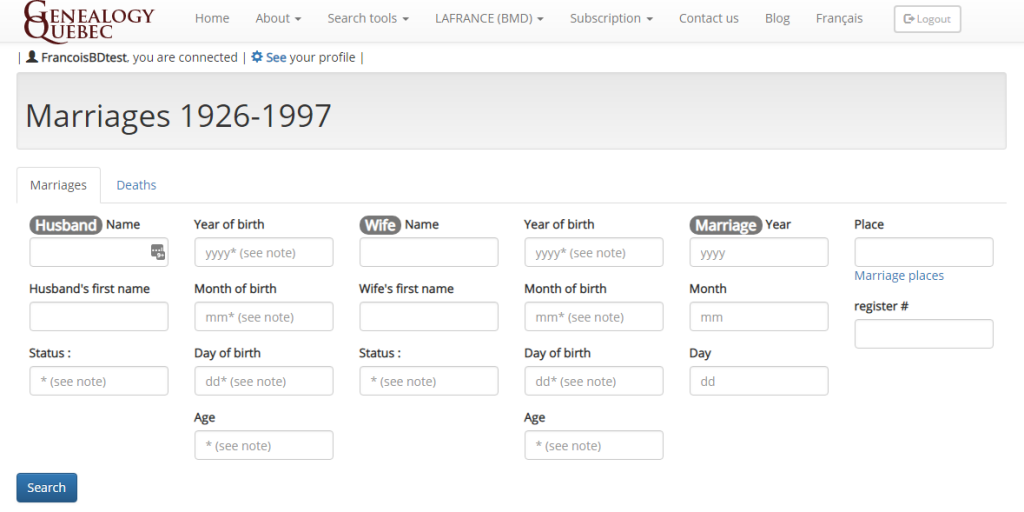 To start your search, you must fill one or more search fields and click on the “Search” button, which will produce a list of results related to your query.

To view the original form associated with a file, simply click anywhere inside the file. Note that the original document is available for the marriages but not the deaths.

The Marriages and Deaths 1926-1997’s search engine allows searching for many variables, which makes it tempting to fill as many fields as possible when using the tool. However, we recommend that you keep your initial search as vague as possible, and clarify it as needed by adding one piece of information at a time. When the name or surname searched is rare or unusual, it is rarely necessary to add more information to the search.

The more precise a search is, the more likely it is to omit the record you are looking for, as every single field must match.
For example, an initial search could start with the surname and first name of the subject. If the number of results is too high, a variable such as the year of the event or the surname of another individual mentioned in the record can be added. Often, simply adding a third variable is enough to narrow the search down sufficiently.

Additionally, it is important to note that the forms have changed several times over the decades. Certain fields only existed in one version of the form. As such, it is recommended to stick to the primary search fields (names and dates) unless certain that the form you are looking for contains the field and the information in question.

As with many of Genealogy Quebec’s tools, you may use the “%” character as a joker to search for a partial name. For example, a search for “Lar%” will include any name beginning in “Lar”, such as Larrivière, Larramée, Larue, etc. This allows you to keep your search more generic and is particularly useful for surnames that tend to have many different spellings.

As a Genealogy Quebec subscriber, you have access to the entirety of Quebec’s Parish Registry up until 1940 through the Drouin Collection Records. As such, you should be able to find the original church records associated to the forms that predate 1941.

In the case of the marriages, the parish in which the marriage was recorded is mentioned in the form, which allows us to trace the parish record rather easily.

As an example, we will use the marriage form of Florent Beaudoin and Madeleine Lafond, which we have found using the Marriages 1926-1997 database. 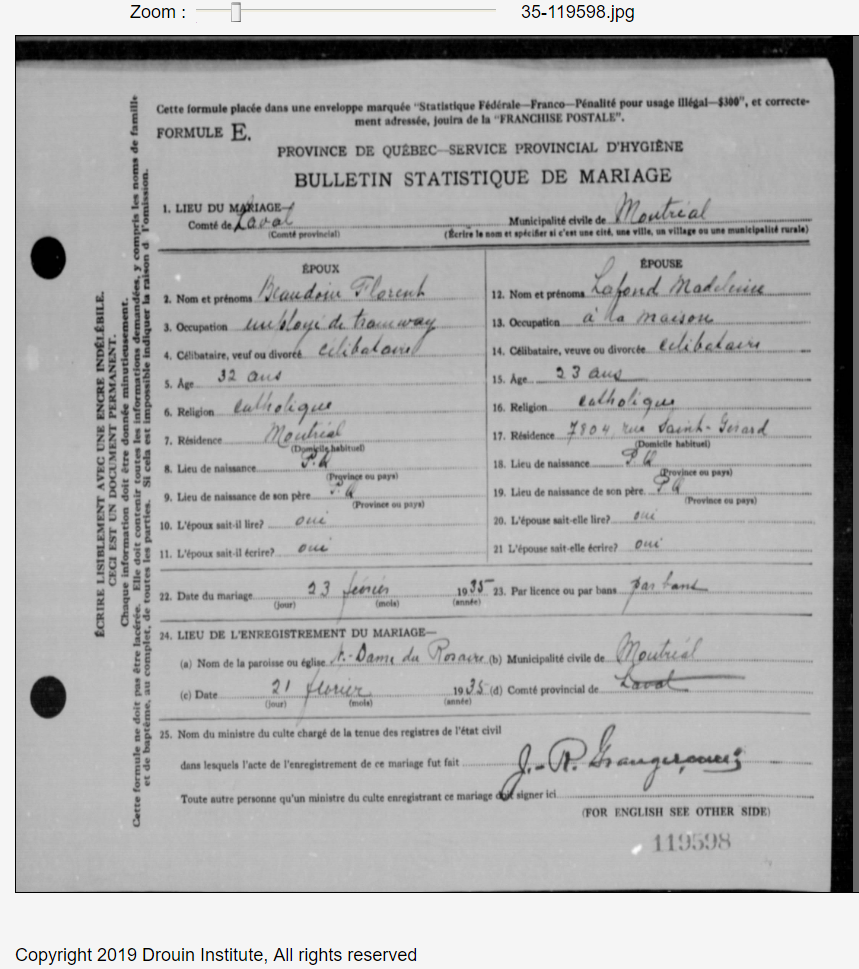 The first step is to make sure the marriage falls within the date range covered by the Drouin Collection Records. Since this marriage was celebrated on the 23rd of February 1935, and so before 1941, we should be able to find the church record associated to it. The form indicates that the parish is “Montréal – N-D-du-Rosaire”.

We will find the original church record by browsing the parish register of Notre-Dame-du-Rosaire for the year 1935 in the Drouin Collection Records. 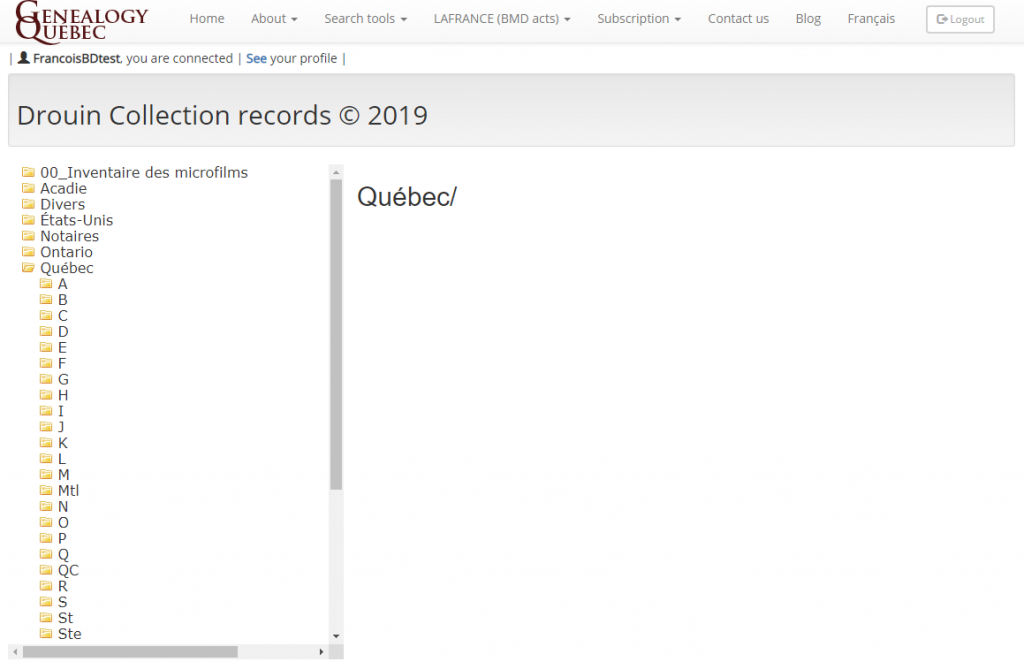 Once in the Drouin Collection Records, you will notice that the various registers are organized in a file tree structure. We will begin by opening the Quebec folder, as the parish we are looking for is in Quebec. Inside the Quebec folder, we must find the right parish folder. 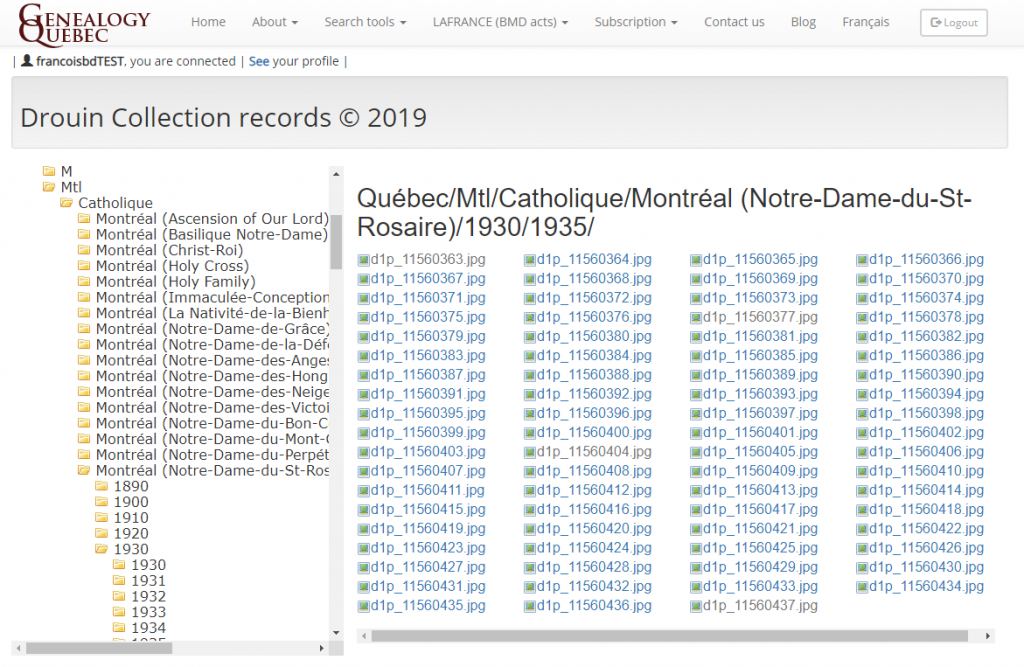 Once inside the correct folder, we must navigate to the right year, which will give us access to all the images associated with that register for that specific year. It is important to know that in general, the images are listed in chronological order.
This means that the first image in the folder will contain the first events recorded in the year, which are usually the ones from January. Similarly, the last few images in the folder will be those from the end of the year.

However, in the case of Notre-Dame-du-St-Rosaire, the baptisms and marriages were recorded in two different books. As such, the 1935 marriages begin in the middle of the image series. A bit of navigation will be necessary to find the record we are looking for. 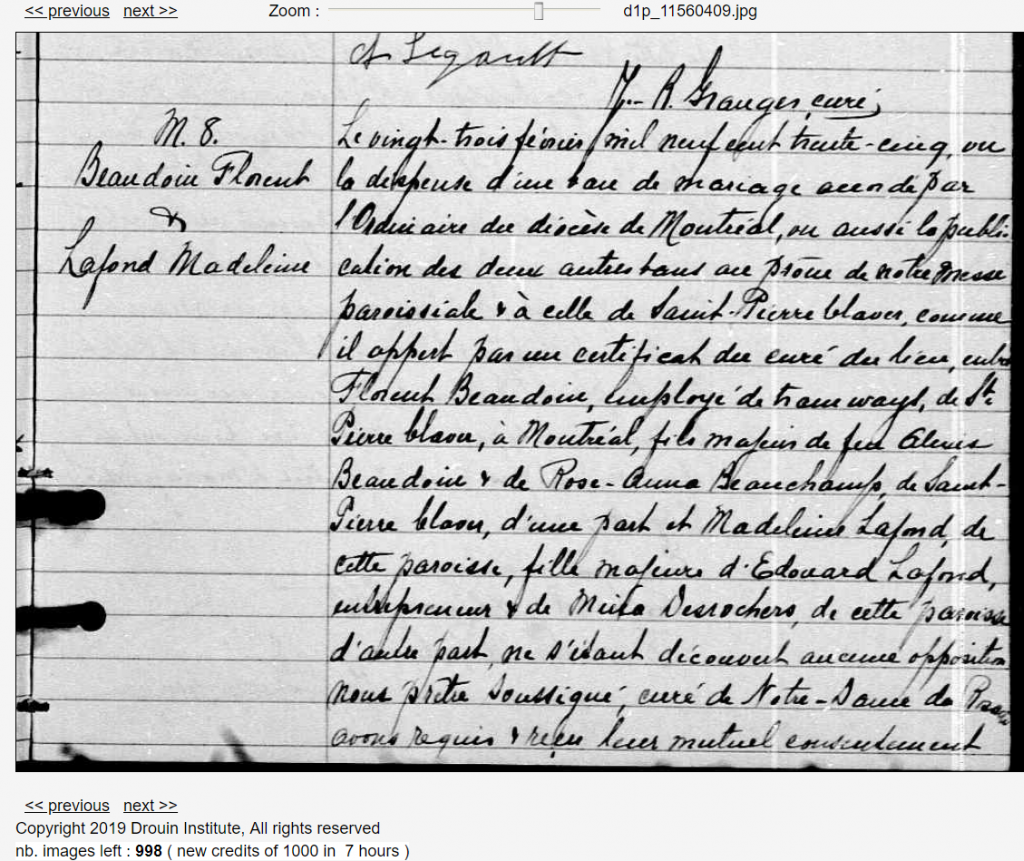 And with that, we were able to find the church record associated to the marriage form given by the Marriages 1926-1997 tool.

Finding the original church record associated with a death form is a little more complicated, as the form does not provide us with the parish information. Nonetheless, the form does give us the place of residence of the deceased. With that information, we can often find the correct parish. This may prove harder for larger cities, as they often have multiple parishes. Some detective work may be needed!

As an exemple, we will try to find the burial record associated to Louise Roy’s death form, which we obtained from a search in Deaths 1926-1997.

The form tells us that Louise Roy died on the 11th of November 1928, and that she lived in St-Hyacinthe. Although St-Hyacinthe is not identified as being the city where the death was recorded, it is likely that it is where we will find the burial since the deceased lived there.

Browsing the St-Hyacinthe folder in the Drouin Collection Records, we notice that it contains several sub-folders associated to different parishes. Since we have no way of knowing which parish would contain the burial record, we will have to browse one folder at a time. The first folder contains the Cathédrale de St-Hyacinthe parish register. 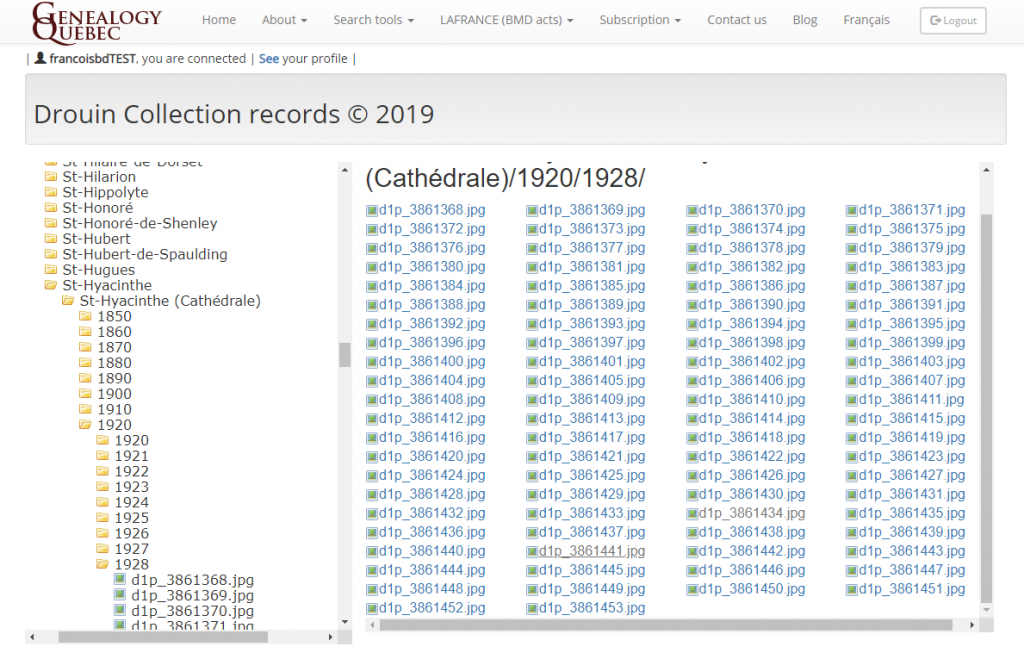 Since the death occurred in November, we begin our consultation among the last few images in the folder. It is very possible that the burial was not recorded the same day as the death, as it was common for a burial to be recorded one or two days after the death of the person. While browsing the register, we must keep in mind that the date of the burial could be the 12th or even the 13th of November, 1928. 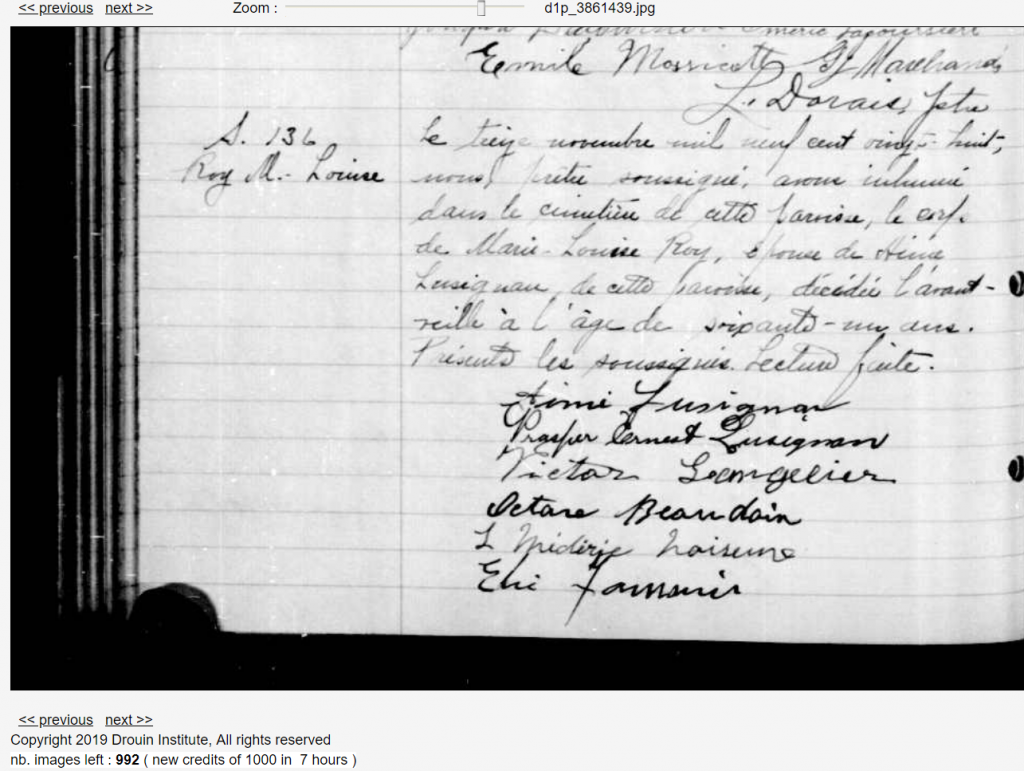 And indeed, the burial was recorded on the 13th of November. With a little detective work, we were able to find the original church record associated to a Deaths 1926-1997 form, which provides us with some additional information regarding the event.