Over 1.7 million marriages dating from 1850 to today have been added to the LAFRANCE, one of the 15 tools available to Genealogy Quebec subscribers. These marriages were transferred from the NBMDS and Connolly File collections. 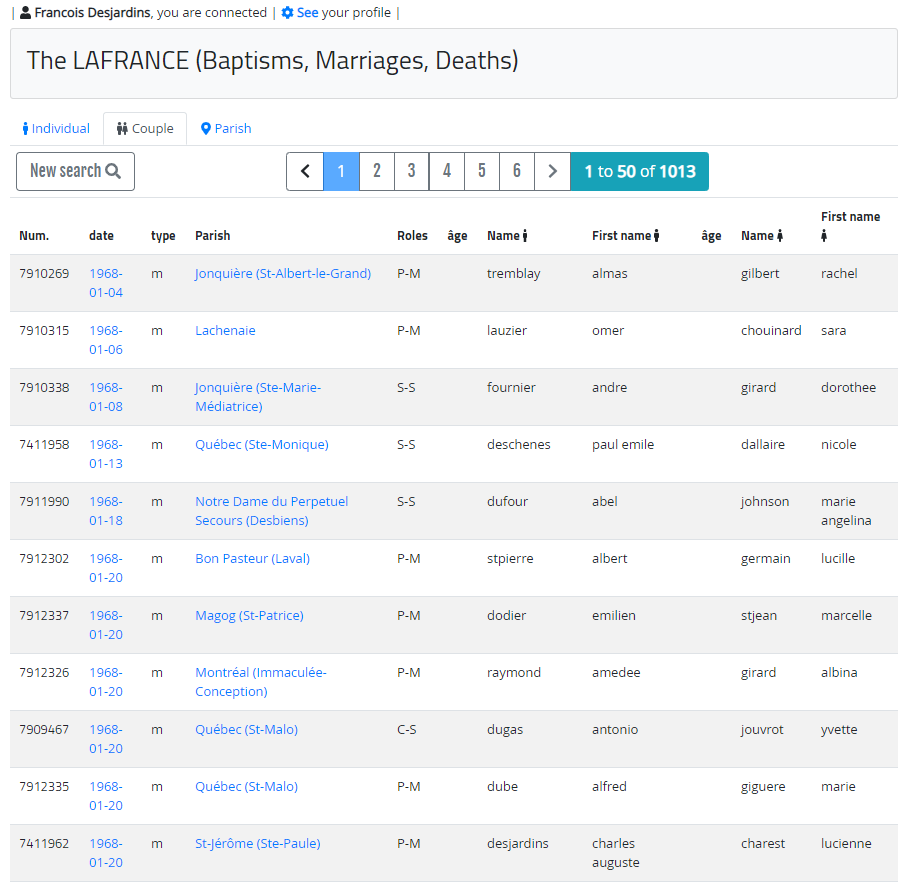 Search results from the LAFRANCE showing some of the new records

Here are the locations and periods covered by these marriages:

Name standardisation and the resemblance function

The LAFRANCE has a significative advantage over the other tools available on Genealogy Quebec, as its search engine is equipped with name standardisation and the resemblance function

When searching in the LAFRANCE, name standardisation ensures that a name is associated with all of its variants. For example, a query for an individual with the surname Gauthier will prompt the search engine to look through the database for any mention of the name Gauthier as well as any of its variations, such as Gautier, Gaulthier, Gotier, etc. Thus, it isn’t necessary to manually search for multiple variants of a name when using the LAFRANCE, unlike on the NBMDS and Connolly tools. 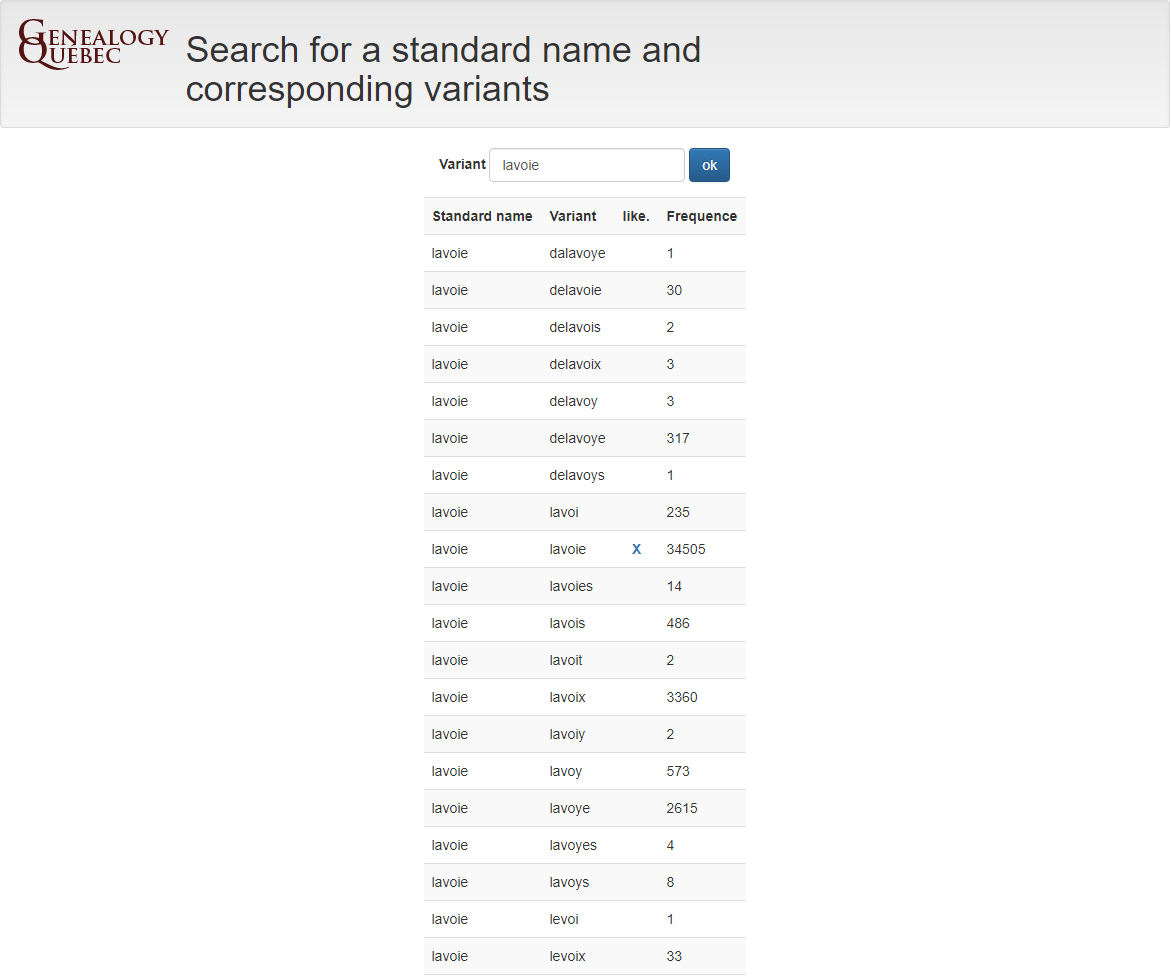 Standardisation of the Lavoie surname in the LAFRANCE

In addition to name standardisation, the LAFRANCE is equipped with the resemblance function, which allows you to search for a name and any other name that resembles it with a single query. The resemblance function differs from name standardisation because it not only includes all of the variants of a name, but also all of the names that are similar to it in terms of pronunciation and spelling. For example, a search for Gauthier, which will include all of the variants listed earlier, will also include the names Gonthier, Vauthier, Gouthier, Authier as well as their numerous variations.

A fairly obvious benefit of adding these records to the LAFRANCE is having more documents centralized in a single tool. This allows our subscribers to carry out more efficient and rapid searches on the site, without having to jump around between collections. With that in mind, we plan to transfer a large number of documents to the LAFRANCE in the months to come.

We took the opportunity presented by this transfer of records to systematically correct them. As such, the names of the parishes associated with the records have been standardized, numerous name entry errors have been corrected, and all duplicated records have been deleted. Therefore, the copy of these records which is currently in the LAFRANCE is of much better quality than the one previously available on the website.

In conclusion, the standardisation of names, the resemblance function, and the correction and centralization of these records has made them much easier to search and access on the site.

More about the LAFRANCE

You may browse the LAFRANCE as well as tens of millions of documents of genealogical and historical significance by subscribing to Genealogy Quebec today!

Finding the original document associated with a record

For now, the marriages added to the LAFRANCE through this update are not linked to the original document from which they are sourced.
However, as a Genealogy Quebec subscriber, you have access to all of Quebec’s parish registers up to the 1940s in the Drouin Collection Records.
Therefore, you can find the original document associated with a record if it dates from before the mid-1940s.

To illustrate the process of finding a document in the Drouin Collection, we will use the marriage record of Clovis Desjardins and Corinne Dufour, celebrated in St-Sauveur-Des-Monts on February 4th, 1925. 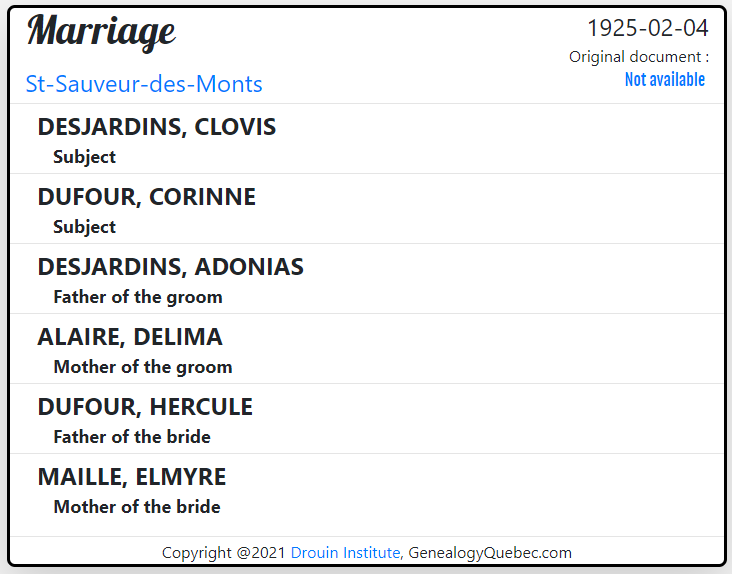 Clovis and Corinne’s marriage as presented on the LAFRANCE

First, we head over to the Drouin Collection Records tool, where Quebec’s parish registers are located. You will notice that the registers are sorted by location. As the document we are trying to find was recorded in Quebec, it is in that folder that we will carry out our research. The collection that interests us, that is, the civil copy of all of Quebec’s parish registers up to the 1940s, is found under the Fonds Drouin folder. 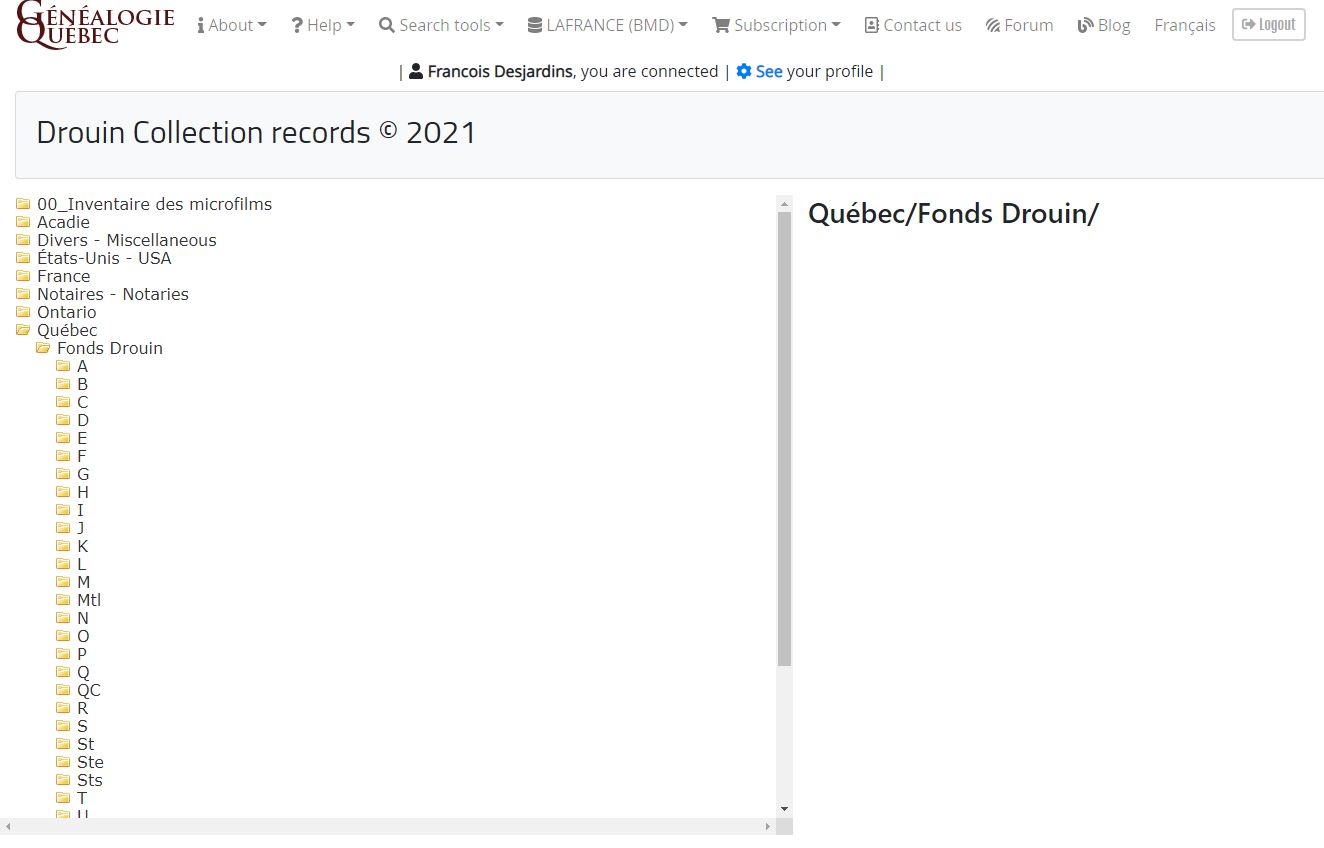 Once inside the parish’s folder, we must navigate to the correct year, which will give us access to all the images associated with that register for that specific year. It is important to know that in general, the images are listed in chronological order.
This means that the first image in the folder will contain the first events recorded during the year, which are usually the ones from January. Similarly, the last few images in the folder will be those from the end of the year.
As Clovis Desjardins and Corinne Dufour’s marriage took place early in the year in February, we can expect to find it among the first images of 1925. 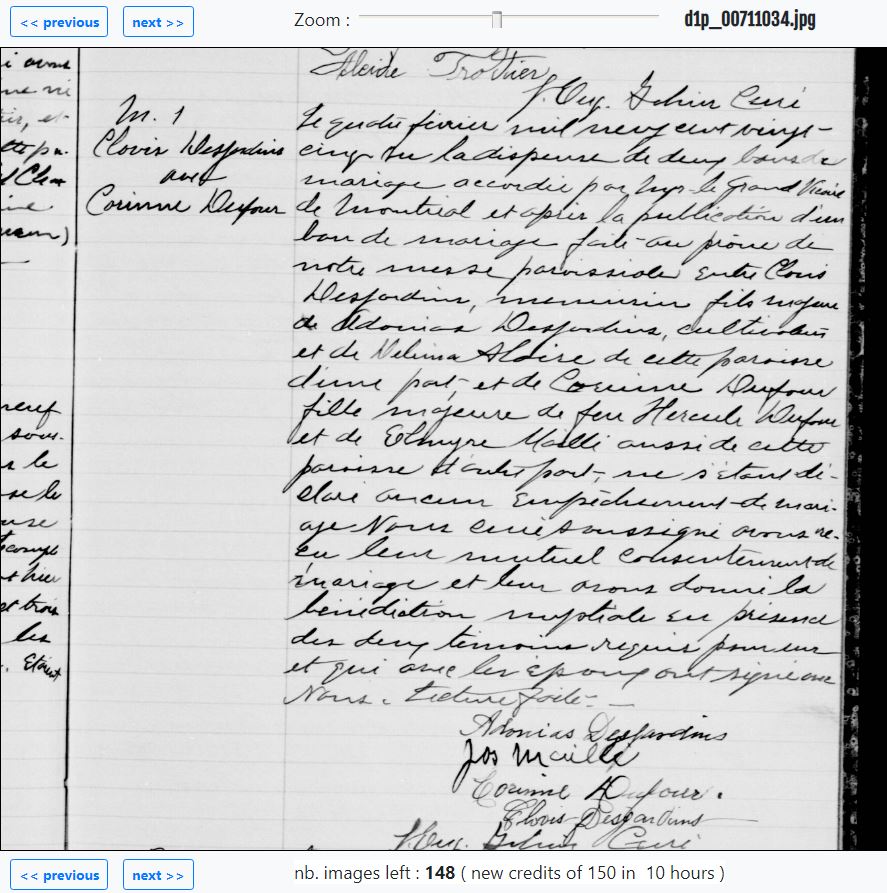 And with that, we were able to find the source document associated with one of the newly added LAFRANCE marriages.